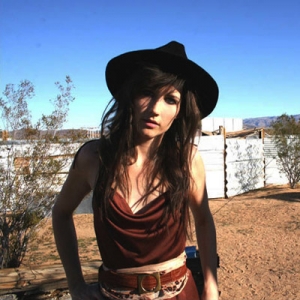 From a thunderous melodic chant to a gritty rockabilly strut, Angie Mattson's Skeleton Arm is cool and sophisticated with a wild and tender heart.
Angie defies genre categorization with this inspired work of art.
Co-produced by Mattson and guitarist Jeff Mendel at Violet Room Studios in Los Angeles, they confidently weave jazz, bluegrass, and tribal
elements into a blanket of lyrical and ethereal folk songs. Mattson's delivery is calm and inventive, and her elegant songwriting weaves heartfelt
stories with rich cinematic images. Stormy vocals sway from disarmingly intimate to angelic and soaring as she tastefully displays her powerful
range. Lush, swampy guitars, haunting background vocals, and smoking hot drums complete this unique and warmly crafted album. "The songs
are mostly about relationships past and present, my heart and body seem to control everything I do, and my mind cleans up the mess" Citing
influences like Twin Peaks, Fleetwood Mac's Tusk, Tom Petty, Erykah Badu, Robert Plant & Alison Krauss, The Latin Playboys and the balmy
soul of the south. "These are a handful of the songs I have written in the past few years, and a lot has happened in those years, there is a lot of
things I write about that I don't talk about in life, things I am not even aware of sometimes, these songs have a mind of their own, they well up
and spill out."