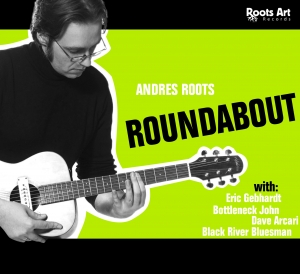 Rated "one of the best six stringers in European blues" by Colombia's Historias del Blues and "a stylish and versatile writer" by Finland's Blues News magazine, the Estonian guitarist and songwriter Andres Roots was born in the U.S.S.R. in 1976 and played his first show in Denmark in 1995.

After stints in several award-winning college bands in Tartu, Estonia around the turn of the century, he co-founded Bullfrog Brown in 2003. Quickly earning cult status in their native country and securing airplay across five continents, the alt.blues trio went on to play hundreds of shows from the Baltics to the UK, sharing stages with the likes of Honeyboy Edwards, Deltahead and Gurf Morlix.

With reviews ranging from "Tom Waits' missing blues album" (Roots & Fusion, UK) to "traditional Delta blues in all its beauty" (SoundGuardian.com, Croatia), the CD was welcomed as "a hugely entertaining album that has far more appeal than its blues credentials would suggest" (The Music Critic, UK). Accordingly, Top 3 TV hits continued with "Watcha Do" (feat. Black River Bluesman) and "Lemon Days" (feat. Gebhardt and Jokelin) while two more tracks made it onto the soundtrack of a popular youth TV series.

For the album’s release party, Roots had recruited his former guitar student Martin Eessalu and Estonia’s finest blues harpist Indrek Tiisel. Live footage from the night ended up as Episode 1 of the "Folgikelder" music series on Tallinna TV and the band soon became known as Andres Roots Roundabout, with line-ups ranging from the core trio to multinational quintets.