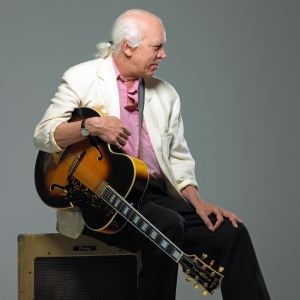 At last, one of the great roots music guitarists fulfills a long-held ambition, and releases a jazz album on Stony Plain
A stretch? Not really - The Amos Garrett Jazz Trio reminds us all that the blues was once a major part of the jazz world

Over a four-decade career, there's not a lot Amos Garrett hasn't done.

As one of the most distinctive guitar players since the Telecaster was invented, he's made almost a dozen albums of his own, most of them for the Edmonton-based label Stony Plain. He's appeared on more than 150 artists' recordings, and he's played rock and roll, folk and pop. Not to mention just about every other kind of roots music there is, from blues to country.

But, until now, he's never recorded a jazz album.


Oh, a jazz album has been on Amos Garrtt's to-do list for ever; he's been talking about recording one for years.

The nay-sayers may have delayed the project, and he's heard all their reasons: your fans won't like it, your audience won't understand it, it's not roots music, you're not Pat Metheny or John Scofield.

Wrong, wrong, and wrong again. When you listen to the new Stony Plain album by the Amos Garrett Jazz Trio, you'll relate immediately to all his other albums, because the common root of the blues is instantly recognizable.

And what's to "understand"? It swings and it's smart and inventive and witty. And, no, it doesn't sound a bit like Pat Metheny or John Scofield or any other jazz guitarist.

In fact, the new CD sounds like Amos Garrett, multiplied by two with the addition of Calgary guitar virtuoso Keith Smith, adept at chord soloing and the use of elaborate plucked harmonics and alternating harmonics and natural fretted notes. You know, the things pioneered by Ed Bickert and Chet Atkins and then taken to the moon by Lenny Breau (a major influence).

And add Greg Carroll who is the bass playing rock that Amos and Keith lean on.


Garrett doesn't see a jazz album as a major stretch.

"What we‘re doing is bringing the blues back to jazz - it used to a big part of jazz, but along the way the music got too complicated, some of the musicians got too self-involved, and the blues got lost."

He pauses, and adds: "And a lot of jazz fans got lost too. It would be nice to get a few of them back in the fold."

The Amos Garrett Jazz Trio's debut album includes pieces by Miles Davis, Thelonious Monk and Freddie Hubbard, all modern jazz players who were steeped in the blues. (Perhaps, in the future, the trio will record pieces by Horace Silver and Dizzy Gillespie two more bebop players who knew the basic soul of 12-, 16- and 32- bar blues.)

There are other gems on the CD, all of it recorded live at various concerts in Western Canada. Among them, a stunning vocal by Roberta Donnay on "Skylark," an old Hoagy Carmichael/Johnny Mercer tune. Marvels Amos:

"This is an incredibly hard song to sing; there are three key changes in the bridge alone. Roberta sings it like Billie Holiday without the heroin..."

There's another classic from the American songbook, "Cocktails for Two," and a medley of two tunes by Bob Erlendson, a Calgary-based jazz player whom Garrett has long admired - and who taught the late Lenny Breau.


Amos Garrett hates reading his bios - he feels that his story's been told so many times he can hardly go over it once again.

But, for any latecomers, here are some basic notes:

"Every month, I celebrate the fact that I now get pensions from the United States and Canada, and my wife is still working," he explains, sitting in their Victorian house in High River, Alberta.

But that certainly does not mean he's retired, or even slowing down, He loves working with his Jazz Trio, he'll be leading the famed House Band at the Edmonton Folk Festival again this summer, and there will be dates across Canada. He's going to teach at a music camp in Alaska - and there will, no doubt, be time for fishing. The Jazz Trio is set to play at the Vancouver Island MusicFest, and Amos will play an all-star guitar session with James Burton, Albert Lee and David Wilcox - a serious amount of twang power. And, of course, he still has his powerful blues band of 25 years, the Eh! Team.

Sounds like a jazz life, indeed...
10
What's This
Advertisement