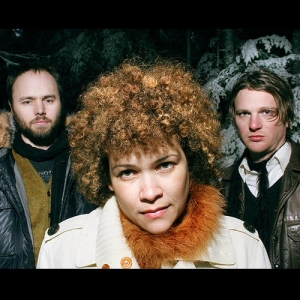 Teisha and Scott met in 2002 and began playing duo gigs and recording songs on a 4-track. When they had enough material together they got Scott's former Flatirons' bandmates Jesse Emerson (upright bass) and Richard Cuellar (drums) to play shows and record their first record, "Somewhere Left to Fall..." (released in 2003 and recorded and co-produced by Mike Coykendall of the Old Joe Clarks and M. Ward band.) Mike pitched in on many instruments, along with his friend and band mate Mark Orton of The Tin Hat Trio, adding accordian, tiple and electric piano. At this time, Jesse was playing with the Decemberists and appears on the Kill Rock Stars release, "Her Majesty, the Decemberists". In 2004, Jesse joined Amelia full-time and the band released a second studio album (also produced by Mike Coykendall) called "After All". In 2005, Amelia released a live recording called "Por Avion" and in 2006 drummer Richard left the band in order to become a tattoo artist. For a brief time, Amelia brought on two additional players (Michael Papillo and Stevie Moretti) and in this formation, toured up and down the West Coast. In 2006, Amelia contributed a song to the Elliott Smith tribute album "To: Elliott From: Portland". Since then Amelia has been playing as a trio (with Teisha singing and playing drums) often taking on guest players ..boards such as Mark Orton and Matt Brown. The band finished its third studio album, A Long, Lovely List of Repairs (engineered and produced by Mark Orton of Tin Hat) to be released April 22nd, 2008. The band is looking forward to touring to promote the new album and has already begun recording additional new material.
2
What's This
Advertisement