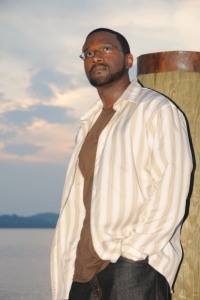 Born in MD on the day after his mothers birthday, he was destined to sing. Both sides of his family were known for their vocal chops and Ameen was no exception. Raised in a single parent home and early on in Atlanta, GA not really knowing his father, times were both tough and full of joy. He would often escape by making up stories and mimicking scenes from movies and TV shows, so much so that his grandmother assumed he would be a playwrite, but God had something else in mind. Upon losing the family matriarch who everyone effectionately called "Big Ma" a series of events happened that led to a crossroads in the life of Ameen and his brother. His mom was diagnosed with cancer and sent the boys back to MD to live with their uncle. It was here that his love for music took fool effect. He always knew privately that he could sing, because he would mimic all the singers he heard. But in middle school his music teacher brought out his full voice and the rest, as they say is history. He began doing talent shows and formed a group with his brother and three neighborhood friends. As the lead vocalist and songwriter, even in middle school he stood out. Ameen's fortunes also began to change as well. He developed a loving and lasting relationship with his father, his mother overcame cancer and while in the 10th grade he gave his life to Christ. His whole world seemed to change, but his love for music did not waiver and Gospel took his voice and passion to another level. Everything in Ameen's life past and present has shaped his songwriting and how he views life, including his undying love and gratitude to God. He often says that "even though I went through so much in my time here on earth, God has used it all for the good, and I'm thankful that He chose to use me". Ameen has even more to be grateful about now, he is the proud husband of over 12 years to Mrs. Shavonna Butler and they share 4 beautiful children. With his heart and mind focused on the vision and mission God has for him, it shouldn't be a surprise to anyone to see phenominal things from this young man.
0
What's This
Advertisement