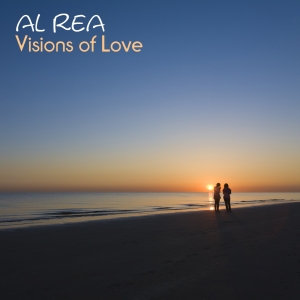 Album review by Nick DeRiso
Smooth jazz that’s been smoothed even further out, Al Rea’s Visions of Love has a glassy tranquility – almost to the point, at times, of sounding like space music, and just as mesmerizingly relaxing.

Perhaps the best example is the beautifully fragile “Deeply True Love,” Rea’s most emotional rumination here at the piano. “Island Breath” also uses the area around the music to great effect, then fills that echoing silence with a delicately inviting guitar. “Michigan Farewell,” meanwhile, follows a path from darkness to almost anthematic light, with Rea playing piano in front of little else besides a clattering backbeat. “Seaside Eve” explores an arctic soundscape, with only a flinty synth to distract from the chill.

The album’s best moments, though, combine this concept of cool placidity with more offbeat textures.

The title track is, on its surface, lightly propulsive – with a smart modern cadence, and an R&B-infused groove. But Rea works in counterpoint with a series of keyboard flourishes, giving the tune a dreamy quietude. “Curiosity” similarly employs a thudding dynamism that at first recalls hip hop, yet there is a gently trickling piano figure running across its middle. A waterfall of synthesized sound begins “Dancing on the Moon,” before Rea’s snappy electronic rhythms join the proceedings – but it is that initial sweeping keyboard which continues to define the tune, giving it a cerulean quality. “Indian Summer” works in similar juxtaposition, when a narrative electronic accompaniment – almost like a solo by lonely French horn, at times – combines with a jaunty rhythm straight out of Stevie Wonder’s golden era.

Tracks like “Forever You” and “Sun on My Skin” explore more overtly classical influences, with a compliment of shuddering strings in both cases tangling and untangling with a contemplative piano. “Skin,” after a turbulent beginning, is the more resonant of the two – with a deliberative solo turn that cuts across the innate stoicism of its own chamber-music ambitions.

“Moments” is the album’s straight jazz moment, as a swinging cadence and riffy guitar give way to these angular piano fills. Rea then adds a sneaky rebuttal on the keys, sounding like a pair of garrulous brass men. “Piano Bar,” in a fun twist, is that song’s polar opposite – as Rea slows things down to a quiet-storm pace, offering only a few genial addendums at first at the keyboard, before finally welling up into a smartly romantic statement.

In this heady environment, Rea can bring in a stunning series of influences. “Sweets Around Me,” festooned with a host of ricocheting rhythms, finds Rea combining both acoustic and synthesized sounds to create a throwback 1970s-era fusion-jazz sound. Then there’s “Take My Hand,” which could have worked as a backing track to the next big Owl City hit, so catchy is its unadorned sense of optimism. “The Game” includes a plucky bass line that recalls Earth Wind and Fire, though once again Rea moves well outside of that funky set of expectations with a swooning keyboard interlude. The driving closing track, “Believe in You,” has the arid pulse of 1980s dance music, and a circular keyboard structure straight out of the Pet Shop Boys.

Not everything on Visions of Love strikes such a perfect balance. Songs like “Delicious Day” and “Imagination,” for instance, feel too plasticine to be soul yet it’s too busy to match the album’s earlier sense of considered calm. The computerized rhythms on “Circus” are pushed so far up in the mix that they distract.

Still, those rare missteps do nothing to take away from this offbeat, deeply creative album’s other, more fully realized successes.

Album review by Jason Randall Smith
Founder and member of Disconauts Music Production in Germany, Al Rea specializes in making music that serves as window dressing for commercial projects worldwide. His work has been licensed for various uses in television and film, supplying the right mood to fit a creative need. Visions Of Love is Al's latest full-length album, which immerses the listener headfirst into all aspects of the "chill out" aesthetic. Its airy atmosphere can relax stressed-out workaholics across the globe while also supplying a deep mid-tempo groove that could get bodies moving in the local lounge spot.

The opening title track quickly establishes the fact that Al Rea's compositions have life outside of a stock production library. "Visions Of Love" is worthy of heavy rotation with deep house lovers everywhere. Warm chords and shuffling percussion stay in step with crisp drum pads and bouncy bass keys to create an infectious rhythm that's impossible to resist. The wafting ambience of "Dancing On The Moon" can melt the world's cares away as zip line sound effects pepper a lightweight beat that skips across the sky. Sometimes it's just about the right balance of aural sensuality and percussive layers. "Imagination" strikes that balance perfectly with a romantic piano riff and computer tones that zigzag in between the syncopated drum patterns.

With no words to sway a listener's mind in a certain direction, some of these instrumentals leave themselves open to emotional interpretation. "Forever You" and "Sun On My Skin" are great examples. The passionate string arrangement on the former could be part of a romantic theme, but also heard as the building block to a motivational overture. Its hushed and filtered vocals add a hint of dreamy infatuation, but the underlying punch of the snare could inspire a rapper to write verses about attaining your goals just as easily as penning lyrics regarding personal heartbreak. "Sun On My Skin" moves the shakers and cymbals to the forefront, reducing the impact of the drums to that of a muted firecracker. The strings are more solemn in tone, yet still possess an amorous quality, leaving the piano melody to represent for love with a sentimental motif.

It could be argued that Al Rea's greatest strength lies in his love for jazz and how he's able to incorporate that love into electronic music to enhance the quality of his chilled out grooves. "Moments" pays homage to the laid back quartet in smoky jazz clubs, its foundation held in check by the drum kit and low-key rhythm guitar engaged in a need to swing. Keyboard-generated horns add canned accents that could be considered cheesy if it weren't for the unquestionably cool instrumentation surrounding said horns.

Meanwhile, "Piano Bar" is a harmonic hammock of a tune, caressing the listener's ears with sexy chimes, reflective chords, soft bongo taps, and drum programming that suggests a subdued funkiness. It's the sonic equivalent of lying in a beach chair on an island while the waves crash in front of you, one hand nursing a tropical drink with an umbrella in it.

As long as there is a need for royalty free music, Al Rea will always find work. However, Visions Of Love is proof that his music stands on its merit. Whether the compositions on this album supports someone else's project or not, they will find their international audience on the dance floor and in the listening room. In a world full of people desperately looking for ways to decompress from the everyday stresses of life, Al Rea has supplied them with their soundtrack.