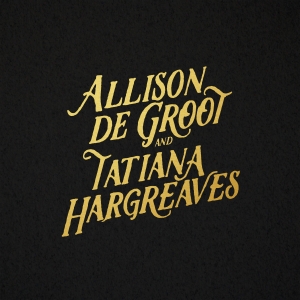 Allison de Groot & Tatiana Hargreaves’s self-titled debut album is a powerful opening statement. To be released March 22, the record not only showcases the duo’s impressive musicianship, but is a reflection on which voices we seek to hear as we explore the expansive, diverse canon of American roots music. The album’s 13 tracks feature lesser-known American fiddle and banjo songs from African American duo Nathan Frazier & Frank Patterson, centenarian Arkansas fiddler Violet Hensley, bluegrass pioneer Alice Gerrard, contemporary master tunesmith Judy Hyman (The Horse Flies), and more. Already leaders in the young generation of roots musicians, de Groot has become known for her intricate clawhammer banjo work with Molsky’s Mountain Drifters, while Hargreaves has brought her powerhouse fiddling to the stage with Gillian Welch and Laurie Lewis. Together they create a sound that is adventurous, masterful, and original, as they expand on the eccentricities of these old songs, while never losing sight of what makes them endure.

Allison de Groot & Tatiana Hargreaves’ self-titled debut album is a powerful opening statement. The record, due out March 22nd on Free Dirt Records, showcases the spectacular musicianship of two artists on the leading edge of a generation of old-time players who are questioning old narratives, and acknowledging the diversity that has always existed in the genre. Allison de Groot, known for her intricate clawhammer banjo work with Molsky’s Mountain Drifters, joins forces with powerhouse fiddler Tatiana Hargreaves (Gillian Welch, Laurie Lewis) to create a sound that is adventurous, masterful, and original, while never losing sight of what makes the music endure.

“We are both drawn to the same types of tunes,” says Hargreaves. “Ones you can really get lost in, that catch your ear in a different sort of way. We also improvise through them in the same way—taking elements from the source recording that stand out as bizarre, or perhaps even accidental, and exaggerating them.” The album draws tunes from sources reaching to Mississippi, Missouri, and the Arkansas Ozarks, in addition to the Appalachian stringband music in which Hargreaves and de Groot are grounded. Though both musicians are known primarily for their world-class instrumental work, this album also showcases their proficient vocals. Hargreaves’ plaintive delivery of bluegrass pioneer Alice Gerrard’s “Beaufort County Jail” renders an already chilling song even more gutwrenching, and the duo’s playful harmonies on The Poplin Family’s “I Don’t Want to Get Married” are pure joy. The record also includes American fiddle and banjo songs from lesser-known African American duo Nathan Frazier & Frank Patterson, centenarian Arkansas fiddler Violet Hensley, contemporary master tunesmith Judy Hyman (The Horse Flies), and John Hatcher, whom the duo call “the 1930s avant-garde fiddler of Mississippi.”

While de Groot and Hargreaves are committed to reflecting contemporary conversations around race, gender and class in their repertoire choices and liner notes, they are adamant that this is not what makes them unique among young roots musicians. “We are part of a generation that is questioning our roles within systems of power and in regards to old-time music—questioning our place and privilege within a music that is based in working class, largely rural, southern America: Black, Indigenous and white,” they say. And with a pronoun-tweaked rendition of the Blue Sky Boys’ “Who Wouldn’t Be Lonely,” the duo also acknowledges that queer musicians have always been a part of the fabric of the old-time community too—whether or not they’ve always been able, as Hargreaves is, to claim that identity publicly.

With this record, de Groot and Hargreaves have immersed themselves in the depths of a centuries-old art form—the interlocking propulsion of Appalachian fiddle and banjo duets—and emerged with a contemporary aesthetic and vision. This is the music they play in their own voices, offered with recognition of the voices that came before—voices that haven’t always gotten the appreciation they deserve. This new album is a fresh, celebratory collaboration between two of the most accomplished old-time musicians of their generation.