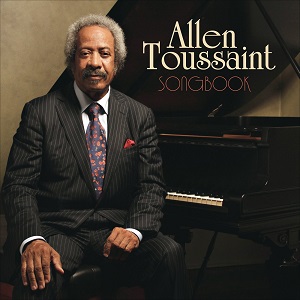 Rounder released Allen Toussaint’s Songbook, featuring performances of twenty five of Toussaint’s songs captured on CD and DVD. The album and accompanying DVD were recorded over two nights in the fall of 2009 at venerable New York City nightspot Joe’s Pub. The DVD includes an in-depth interview with Toussaint, conducted by producer (and longtime friend) Paul Siegel.
The Rounder release offers a deluxe version which will include a CD with 25 songs and a 90-minute DVD that features the second of two live performance filmed at Joe’s Pub in September 2009, plus a 25-minute studio interview; and a standard CD that offers 12 of Toussaint’s classic compositions interpreted by the legendary songsmith himself.

The list of those who have benefited in one way or another from Allen Toussaint’s touch is staggering in its historic and stylistic range, stretching from the late 1950s to the present day, with no end in sight. His studio productions have sold millions of discs and downloads. His catalog of songs has generated hits on the pop, R&B, country and dance charts, and many remain on heavy rotation in various radio formats. His tunes continue to pop up as TV themes and advertising jingles. He has an ever-growing international circle of fans, and though previously reluctant to tour, in recent years he’s become a more familiar figure at music festivals and popular nightclubs around the world.

Though Toussaint has begun to travel far and wide as of late, he never stays away from New Orleans for long – and his music never does. In so many ways, his enduring career -- as this collection so vividly illustrates -- serves as an ongoing tribute to the city of his birth.

In the last fifteen years, Toussaint has experienced a growing resurgence of activity and recognition. Since ’96, he’s recorded seven albums and collaborated with the likes of Elvis Costello and Eric Clapton. He’s been Grammy® nominated and inducted into a number of Halls of Fame. He’s been sampled by such hip-hop heavyweights as O.D.B., Biz Markie, KRS One and OutKast, and appeared nationally on TV and radio – often on the urging of such longtime fans as Paul Shaffer and Harry Shearer, and most recently on the HBO series Treme.

On July 10, 2013, President Barack Obama presented Toussaint with the prestigious National Medal of Arts. In his remarks, President Obama noted Toussaint’s “incredible contributions to the rhythm and blues and jazz music of his beloved New Orleans,” and went on to say “After his hometown was battered by Katrina, and Allen was forced to evacuate, he did something even more important for his city – he went back. And since then, Allen has devoted his musical talent to lifting up and building up a city. And today, he’s taking the stage all over the world, with all kinds of incredible talent, doing everything he can to revive the legendary soul of the Big Easy.”

With a honed sense of dry humor, Toussaint calls 2005’s Hurricane Katrina his booking agent, crediting the storm for rebooting his career as a performer after flooding him out of home and studio. In order to recover – financially, musically, spiritually – Toussaint relocated to New York City and began to perform solo concerts, using Joe’s Pub on Lafayette Street as a home base. Buoyed by a groundswell of support, he worked at something that years of success in the studio had allowed him to avoid: getting truly comfortable on the stage by himself, laying claim to his own songs.

Modesty had a lot to do with it; Allen Toussaint still is not the first person one would go to for information on Allen Toussaint. “I’m not accustomed to talking about myself,” he once explained during a gig, “I talk in the studio with musicians. Or through my songs.”

But over time, Toussaint developed his act – resurrecting material he hadn’t touched in years, taking chances and improvising on established melodies, weaving personal anecdotes into his stage patter. He laced his music with memories of street characters and soul sisters, funky clubs and big-time successes. His show became his story, and his story came together and began to flow – which brings us to the musical treasure before you.

The what, when and how of this collection is comprehensively explained by its creator Paul Siegel – a veteran video producer, and lifelong enthusiast of Toussaint’s work. As this DVD is an important historical document and an overdue personal testament from a musical genius to his fans, it also stands as a tribute to Siegel’s passion for a man who – like too many of New Orleans’s heroes – often evades the national radar.

Nearly eight years after Katrina, New Orleans continues to recover, and Toussaint has returned permanently to the city he never truly left. Give him the heat and the humidity, the spice and the rice, the funky sound of a Second Line and the cool feel of a southern night. “I apologize,” Toussaint sings, “to anyone who can truly say that he has a found a better way.”