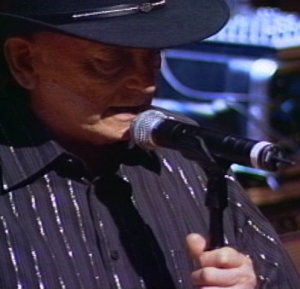 Al Hendrix was born with one of the most intriguing voices of his time. As a youth he was greatly inspired by the music of Hank Williams Sr. Al began performing and playing rhythm guitar in his teen; and has been wowing crowds with his awesome talent ever since!

Al’s first big break came in 1956 when he moved to Bakersfield, CA and met Buck Owens. Al and Buck played music together, along with Bill Woods and the Orange Blossom Playboys. At the famous Black Board Café.
In 1957, Joe Keplinger (aka: Jolly Jody), hired Al to be the lead singer for his band, Jolly Jody and the Go Daddies. The band recorded such songs as “Rhonda Lee” and “Go Daddy Rock” for the Tally label; both of which were picked up by ABC Paramount in February, 1959.
At a later date, Al was signed with LaGree Records in Hollywood, CA. He recorded “I Need You” and “Young and Wild” at Gold Star Studios, issued in 1960. Liberty Records leased both of these tracks for nation wide release. “I Need You” was a number one hit in El Paso, TX for 6 weeks; and made the top 20 in San Diego, CA. Meanwhile, Alan Freed was playing “Young and Wild” on his radio show in Los Angeles, CA (once every hour!).
Al signed with Pike Records in Bakersfield, CA, and recorded four more tracks at Gold Star Studios that same year. “Monkey Bite” and “For Sentimental Reasons”, were released in 1962. “Monkey Bite” got wonderful reviews, however, the distribution was limited as the lyrics were said to be too sexual in content. Two more tracks were produced at Pike Records: “Jumpin’ Johnny” and “Fooling Around” - these two remained unissued until 1985 when they were finally released by White Label, in Holland.
The years went by and finally in 2006, with the help of producer/engineer, Jimmy Accardi, Al cut a brand new CD with some old and some new material on it (“Rare & Rockin’!).
In April of 2008, Bob Timmers inducted Al Hendrix into the ROCKABILLY HALL OF FAME. Al went back into the studio with Jimmy Accardi in 2008 and produced his new CD Rockabilly Lovin’. Bo Berglind of American Music Magazine wrote an article on Al’s career in his March, 2004 magazine.
“Al Hendrix…Gave us some great rock & roll music, - Bo Berglind, American Music Magazine.

With this latest 2009 CD, Al treats us to twelve new songs, recently written and recorded with enthusiasm and finesse, proving that his songwriting and performing talent burns as brightly as ever.