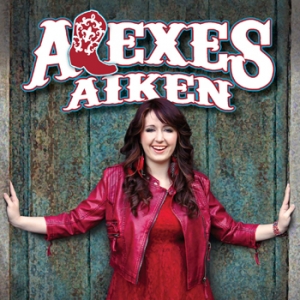 Country pop singer, songwriter, and musician, Alexes Aiken, remakes a Nancy Sinatra classic, “These Boots Are Made For Walkin’”, for the song’s 45th Anniversary and champions American teens with her remake of Queen’s “I Want It All” as the new Youth Anthem.

Aiken’s originals feature the country rock song, “Country Boy”, the country pop songs, “Best in Me” and “Wake Up and See Reality”, and the haunting ballad, “Note on the Mirror”.

“Aiken’s commanding voice is prominent in the club-electronica dance tracks influenced by the country remakes of these two iconic songs - Queen's “I Want It All” and the timeless Nancy Sinatra classic, “These Boots Are Made For Walkin’’," explains Jonell Polansky, the producer of Aiken’s CD and a triple platinum publisher on Tim McGraw’s Dancehall Doctors CD. She continues, “Alexes, like Toby Keith, is doing dynamic dance re-mixes similar to Toby’s new dance-mix of Red Solo Cup that radio stations are raving about nationwide.”

Sinatra’s celebrated version of Boots served as a soundtrack during television news coverage in 1967 as the cameras focused on US Infantry on patrol during the Vietnam War. “When I sing ‘These Boots Are Made For Walkin’’ (in my “Boots” club-electronica dance mix) you can literally hear the boots walking rhythmically,” says Aiken. “I’m so excited to perform this iconic song.”

Aiken’s inspiration to sing comes from her maternal grandfather, Anthony Dandry, who was a singer himself but had thyroid cancer at a young age and radiation destroyed his singing voice. Aiken wrote one of her original songs about him called “Note on the Mirror” featured on her CD scheduled to drop on Thanksgiving.

Aiken is inspired by CMA Best New Artist, Hunter Hayes, and icons Miranda Lambert and Reba. Polansky, continues, “Aiken’s lyrical quality and vocal ability are just a part of Alexes’ singing sensation whether recording or performing live,” says Polansky. “Part of Alexes’ charisma and attractiveness is her devotion to family and love of country music rolled into passionate vocal delivery and a standing ovation stage performance,” she adds.

Alexes is a dynamic entertainer and her riveting voice captivates the hearts and souls of audiences of all ages.

For more information about Aiken, you can visit www.reverbnation.com/alexesaiken, Facebook.com/alexesaikenmusic or www.AlexesAiken.com.
3
What's This
Advertisement