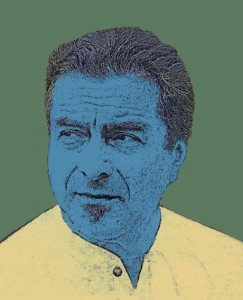 For over 40 years, Al Basile has proven himself to be a rare multiple threat: a singer, songwriter, and cornetist on many of the best blues releases of the era, many in the catalogue of his friend Duke Robillard, the rest under his own name on his Sweetspot label. He is also a widely published poet and fiction writer, and he has written for the stage and radio. 2012 marked the publication of a career retrospective book of his poetry, A Lit House, and 2015 features the release of his twelfth Duke Robillard-produced solo CD B's Expression, a collection of new songs in the 60s Memphis style of his last three discs. B's Expression is, in his estimation, his most fully realized project – as he says, “anyone who's never heard me, and who wants to know what I'm all about, should start with B's Expression. I think it's my best.”

Al started out as a writer. He was the first to get a master's degree from Brown University's Creative Writing program; he also wrote musicals as an undergraduate. Meeting Duke Robillard in 1969 changed his artistic direction for life. He began his performing career in 1973, hired by Duke as the first trumpet player for Rhode Island's premier jump band Roomful of Blues, and played with such blues and jazz greats as Eddie “Cleanhead” Vinson, Red Prysock, Helen Humes, Joe Turner, and Johnny Shines. Leaving in 1975 to devote himself to teaching, singing, and songwriting, he was reunited with Robillard in the late 80s, writing for and playing on a dozen of Duke's projects.

Al started his record company Sweetspot Records in 1998 to showcase his songwriting. Over his first eleven releases he covered many blues, jazz, and roots styles, and featured guest artists such as lifetime Grammy recipients the Blind Boys of Alabama, jazz sax great Scott Hamilton, blues harp greats Jerry Portnoy and Sugar Ray Norcia, Sista Monica Parker, keyboardist Bruce Katz, sax phenom Sax Gordon, and many Roomful horn mates like Doug James, Carl Querfurth, and Rich Lataille along with Duke and his band. Together they brought every song across Al's broad range of influences to idiomatic life.

Al has focused more on reaching the public since leaving teaching, and his CDs regularly place in the top 15 on the Living Blues airplay charts in the months of their release. He has been nominated for four Blues Music Awards as best horn player in 2010, 2012, 2013, and 2014, and he's been on three Grammy nominated CDs either as writer or player. His songs were first covered by Duke, ad later by Ruth Brown on her 1997 Grammy nominated CD R+B=Ruth Brown; in recent years he's had songs recorded by Johnny Rawls, west coast jump band New Jump Blues, and the Knickerbocker All-Stars.

Al's reviews consistently comment on his strengths as a writer. He uses his lyrics to tell stories with universal appeal, bringing to the task his poet's skills but keeping the words strong, simple, and evocative. His ease and strength as a singer continues to grow with each release, and his cornet playing is rich, nuanced, and succinct, informed by jazz but instantly communicative as an alternate voice. His songs are all lyrically and melodically deep, and the characters and situations are like compressed theater.

Al is often referred to as the “Bard of the Blues” – he's a rare combination of formal poet and singer/songwriter. He's a model for his generation in showing how to have sequential careers, remain independent, and produce work that is both accessible and thought-provoking. His music sounds good – you can put it on while making dinner – but if you have time for a careful listen – the deeper you look, the more you'll find.