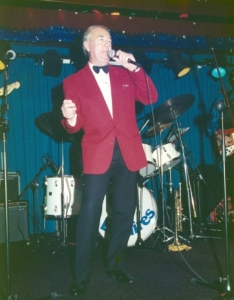 Alan's early introduction to music was through his mother who taught piano lessons. Singing around the piano was a regular occurrence & tuning a diligent ear to the radio, listening to the hit parade tunes of the 40's was another enjoyable pastime.
His father brought home a 78 record of Donald Peers singing the vocal version of the "Harry Lime Theme" & he almost wore out the stylus playing the record over & over, until he was brave enough to have Howard Craven let him perform it live on 2UE's "Rumpus Room". Listeners rang in for an encore which was enough for Alan to realise there was a chance he could try to make a career out of music.
When Rock 'n' Roll became a force in the 50's Alan jumped on the bandwagon with Australia's first Rock 'n' Roll band, "The Houserockers". He rode that dizzy wave through numerous TV appearances, including "Six O'Clock Rock" & by way of 45rpm recordings on the Columbia label.
Later he was able to indulge his dream of fronting a big band when he was employed as compere/vocalist with Al Meader's eleven piece orchestra at the new Eastern Suburbs Leagues Club in Bondi Junction.
Former Joye Boy's drummer, John Bogie, was in the habit of pleading for Alan to break away from the image of rock 'n' roll artist that he'd been stuck with mainly due to his association with the popular "Johnny O'Keefe Memorial Show" which featured recording artists from the 50's. He had always harboured the ambition to record a batch of standards with a Sinatra-like approach when his good friend & guitairist, Dave Bridge, also a foundation Joye Boy member, offered his services to the project.
Alan could not pass up the opportunity & Nice 'N' Easy is the result of a fruitful association with a talented group of musicians who breezed through the various sessions.
5
What's This
Advertisement