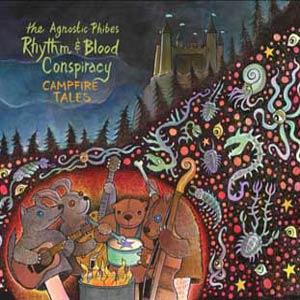 In the deep, dark woods of Canada, somewhere in the middle of nowhere, there is a dilapidated cabin. Illuminated only by a single gas lantern and a wood stove, the frontman of garage-punk, underground legends Forbidden Dimension and the three members of twisted roots-music cult-heroes Agnostic Mountain Gospel Choir compose haunting and raucous tales of death and mystery.

What? Did you hear right? Garage-punk misanthrope Jackson Phibes playing with THAT Agnostic Mountain Gospel Choir? Yes, you did. You heard perfectly well. There’s no need for us to repeat ourselves.

The unlikely collaboration started when the AMGC went on hiatus in 2010 and guitarist Bob Keelaghan found the exact location where Forbidden Dimension’s mysterious singer/guitarist/tunesmith Jackson Phibes had decided to turn his back on humanity. From there, he tracked him to a cabin in the woods. There were rumours why Phibes had become reclusive, ranging from a mental and financial meltdown to deteriorating health. Keelaghan had to investigate what was up and see if Phibes would be interested in recording again.

As it turns out, Phibes was hard at work on new Forbidden Dimension material when the AMGC guitarist — along with bassist Vlad Sobolewski and drummer Jason Woolley — had found him in his remote shack. At first, Phibes was suspicious, belligerent, and suffering from ailments brought on by a steady diet of squirrels. After a persistent badgering, Phibes was satisfied that they were sincere musicians with chops to boot. He agreed to collaborate on an album backed up by members of the AMGC.

Since the late 1980s, Jackson Phibes fronted Calgary’s longest-running punk rock band, now in its 23rd year of existence. FD built its reputation on pounding rock music with lyrics inspired by classic horror movies. Across the globe, fans of garage trash eagerly devoured his classic tunes of cartoonish morbidity like “Tonight I Paint in Flesh Colour” and “Graveyard Line”. Apart from F.D., The English Teeth — his spin-off band — scored the original music for the Canadian indie-cinema smash Fubar. Phibes even made a cameo appearance in the sequel, Fubar II.

How could such a partnership work?

Anyone who bothered to get past the garish, grease-paint stage show and listen to a Forbidden Dimension record knew Phibes was well-versed in the R’n’B of early garage rockers, Screamin’ Jay Hawkins, Link Wray, and pioneering psychobilly. Above all, he is a killer songwriter and storyteller. He just happens to dwell on monsters, madmen, and libidinous biker women. And on the other side of the coin, music critics have frequently referred to the Agnostic Mountain Gospel Choir’s ferocious punk elements in their approach to blues and country. Common ground? Plenty.

With patience and coaxing, the combo recorded Campfire Tales, an album that sews together the worlds of garage rock and roots music, building a bridge between the old-time tradition of the murder ballad with modern macabre storytelling. The dark imagery is augmented by guitars that simultaneously howl with electricity and brood acoustically. Woolley's clanky drums accent growling vocals while Sobolewski’s upright bass pounds away. Together they create an atmosphere both moody and rowdy. Surely, this disc will spin the punk-blues scene on its pointed, little head.

Listen to the eerie, country ghost-ride that calls itself “Campfire Tales”; or the dual-guitar hooks on country-blues-meets-gypsy-freakout “Wolfman Franz” (an ode to an eastern European madman); or “Necking Party”, a hypnotic swamp rock tale of teenage lust and voyeurism gone horribly awry that gets extra spooky with Phibes' ghostly wails from his feedback guitar. The guitars of Phibes and Keelaghan meld seamlessly and the band seduce listeners with their superb musicianship. After prying your eardrums away from your stereo the pairing of Phibes and the Agnostics will make perfect sense.

(Also look for the new Forbidden Dimension CD, Golden Age of Lasers, in a grindhouse near you.)
2
What's This
Advertisement