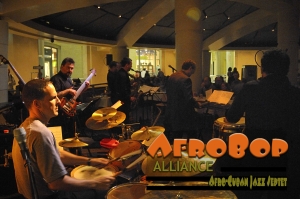 The band's influences come from the musical styles of the many different cultures which come together under the umbrella of "Latin" or "Latin Jazz." Afro Bop's focus is to blend all of these wonderful Latin styles and musical traditions with each member's jazz experiences to forge their own sound. Currently the group consists of bandleader and percussionist Joe McCarthy, pianist Harry Appelman, saxophonist Luis Hernandez, Tim Stanley on trumpet & flugelhorn, bassist Tom Baldwin, Victor Provost on the steel pan, and saxophonist Vince Norman.