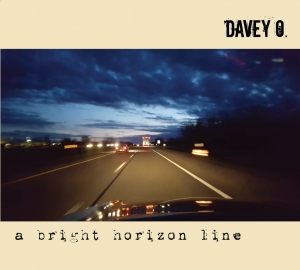 Equal parts songwriter and storyteller, Buffalo’s Davey O. has been recognized on a national level for his past two CD releases with multiple honors among the “best of“ lists of several Folk & Roots radio stations, and as a 2013 New Folk Finalist at the prestigious Kerrville Folk Festival. Davey has also earned the respect of his peers for his incredible work ethic, performing between 120 - 140 dates per year, and for his constant dedication to the art of song craft. With a journalist’s eye for detail and poet’s ear for the well-turned observation, Davey O. finds the universal in the particular, turning day-to-day minutiae into dusty paeans to the indomitability of the human spirit. With each tale another slice of life examined.

Davey is looking to build on the success of his previous release “No Passengers,” (2014 Top 25 of 100 albums Roots Music Report, Best of 2014 - WHRW, WAMC, The Sundilla Radio Hour, WMSC, Radio Crystal Blue, WVPE ) with the 2017 release of “A Bright Horizon Line” - his new, full length CD. Joined by veteran folk artists Tracy Grammer (background vocals), and Pat Wictor (dobro), as well as up and coming artists Matt Nakoa (piano), and Eric Lee (mandolin, fiddle), “A Bright Horizon Line” is a collection of 10 tracks (9 original compositions, and a cover of the Crowded House classic “Don’t Dream It’s Over”) – each one taking the listener on an adventure via music and words, strung along the common thread of this journey we are all on. Co-produced with Neale Eckstein at Fox Run Studios, the production values and arrangements are clear, concise, and cinematic in their quality, successfully capturing the elements of both contemporary and traditional folk music.
1
What's This
Advertisement