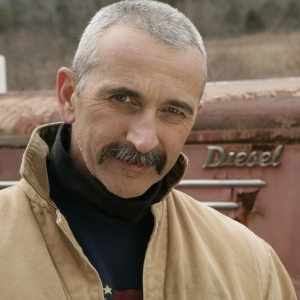 Aaron Tippin is a force of nature, a man whose passion for music fuels an array of other vigorous enthusiasms. Apart from writing and recording songs and wowing crowds with his live appearances, Tippin is also a pilot, farmer, winemaker, outdoorsman, competitive bodybuilder and devoted family man. He even runs his own record label. It's no surprise then that so many in the music industry regard this tireless South Carolinian as the "Hillbilly Hercules."

Fresh from unveiling He Believed, his exclusive album for Cracker Barrel Old Country Stores, Tippin has now released a second collection of songs, one that salutes America's truck drivers. It's called In Overdrive and features the trucker classics "East Bound And Down," "Drivin' My Life Away," "Prisoner Of The Highway," "Girl On The Billboard," "Movin' On," "The White Night," "Roll On," "Truck Drivin' Man," "Long White Line," "Drivin' Fool" and "Danger Dave."

In Overdrive was sparked by Tippin's concern that country music had turned its back on its highway heroes. "Seems like somewhere along the line trucking music got shoved off the country music plate," he observes. "I don't understand exactly why. The trucks are still out there. And they're busier than ever keeping America rolling. I know the folks who work and live in the trucking world still love this music—and so do most fans of real country music. This album launches my crusade to bring the music back."

Tippin has crusaded for the working man and woman since he ripped country music wide open in 1990 with his uncompromising "You've Got To Stand For Something." On the strength of that remarkable song, comedian Bob Hope invited Tippin to appear with him when he toured the Mideast to entertain the troops of Desert Storm. Tippin has been a favorite of—and a standby for—America's fighting forces ever since.

In the years that followed, Tippin's voice continued to ring loud and clear with such hits as "I Wouldn't Have It Any Other Way," "There Ain't Nothin' Wrong With The Radio' (an affectionate nod to the kind of automotive clunker most of us have had to rely on at one time or another), "My Blue Angel," "Working Man's Ph. D.," "The Call Of The Wild," "I Got It Honest," "That's As Close As I'll Get To Loving You," "For You I Will," "Kiss This" (a cheeky No. 1 song he co-wrote with his wife and partner-in-everything, Thea).
Tippin became immediately enraged by the sneak attacks of 9/11 and quickly remembered a song he'd recently penned, (his proudly defiant), "Where The Stars And Stripes And The Eagle Fly." He instantly booked studio time and rushed to Nashville and tracked this emotional anthem that reminds countless people as to what it means to be an American. Tippin has since journeyed to Iraq and Afghanistan to sing for the troops. These missions, in turn, have earned him guest spots on such shows as Larry King Live and Hannity & Colmes to speak on the military's behalf.

Tippin's honest lyrics and direct, impassioned vocals have built a large and devoted audience. Five of his albums are certified "Gold"—Call Of The Wild, You've Got To Stand For Something, Lookin' Back At Myself, Tool Box and People Like Us. A sixth CD—Read Between The Lines—stands at the "Platinum" level.

In keeping with his take-charge attitude, Tippin established NIPPIT Records in 2005. In 2008, the label partnered with Cracker Barrel for the release of He Believed.

Tippin's retreat is a 500 -acre farm in middle Tennessee, where he labors, relaxes and revels in the outdoors with wife and musical collaborator Thea and their two sons, Tom and Ted. It's also the home base for his hangar (complete with four working aircrafts), runway, recording studio and winery.

During the months ahead, Tippin and his band will be roaring along America's vast highway grid, meeting truckers and singing their praises to a new generation of country music fans.