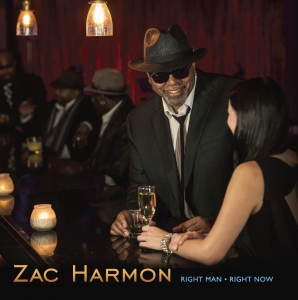 Zac Harmon is an award-winning guitarist, organist, singer, and songwriter whose distinctive style combines the best of old-school soul-blues artists with modern lyrics and themes that bring the blues into a new century. Right Man Right Now is contemporary music that proves just how alive and relevant the blues is today. Addressing issues straight from today's headlines, Zac presents them in a fresh original style built on the best blues tradition. And he has some incredibly talented musicians helping him. Guests include Bobby Rush, Lucky Peterson, Anson Funderburgh and Mike Finnegan.

A native of Jackson, Mississippi, Harmon played guitar for Z.Z. Hill, Dorothy Moore and Sam Myers before moving to L.A., where he established himself as a successful session musician, songwriter, and producer, working with the likes of Evelyn “Champagne” King, the Whispers, the O’Jays and Black Uhuru. Zac won the Blues Foundation’s prestigious International Blues Challenge (IBC) title of “Best Unsigned Band" and two years later won the Blues Music Award for “Best New Artist Debut.”

Since then he’s become one of the blues' strongest live performers, thrilling fans everywhere from Memphis to Mumbai. With Right Man Right Now Harmon finally brings that excitement to a brand new CD, his bluesiest ever. The album provides definitive proof that Zac Harmon is indeed the right man to firmly establish all that blues can and should be right now in the second decade of the new millennium.
16
What's This
Advertisement