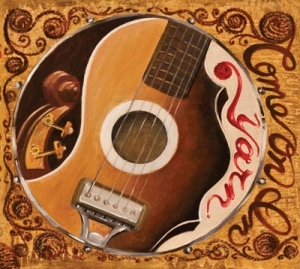 Brooklyn might seem an odd place of origin for a country band. The perennial home of cold concrete, hipsters and industrial ruins has been most famous for its indie rock scene over the past decade. But to Blake Christiana, frontman and songwriter for Brooklyn-based Americana/Alt-Country band Yarn, it’s the place that offered not only solace from his Schenectady, NY upbringing and a place to meet other skilled musicians, but a certain anonymity perfect for a songwriter who crafts best in loneliness.

Indeed, in the song “Time Burns On” off the band’s new record Come On In, Blake croons for the city in his best country twang, “I gotta get back / To my Brooklyn flat / Where the neighbors don’t know my name / And the forecast calls for rain.”

Yarn has received quite a bit of buzz in the Americana world as a result of the band’s first two recordings as well as strong performances at clubs and festivals. Their self-titled debut record reached No. 14 on the AMA and R&R Radio Charts, and ranked No. 79 on the AMA’s Top 100 Albums of 2007. Yarn’s 2008 follow-up, Empty Pockets, which features guest appearances by Edie Brickell, Tony Trischka, Casey Dreissen and Caitlin Cary of Whiskeytown, spent months in the AMA charts. The album peaked at No. 5 and was honored with eight first round 2009 Grammy nominations in several categories.

The band owes as much to Gram Parsons and Earl Scruggs as to Jerry Garcia and Exile On Main Street-era Rolling Stones. Following in a fine tradition that includes forward thinking roots bands like The Flying Burrito Brothers and New Riders of The Purple Sage, Yarn weaves roots music idioms into a fresh sound that turns on hipsters and fans of country music alike with technically impressive song-crafting and universal tales from the road of life.

On the band’s upcoming release, Come On In, the loneliness is almost palpable. With themes like lovers and towns left behind, finding your place in a present day New York City and searching for comfort in the sweet and familiar face of quiet nostalgia, Come On In is a record of longing, of loss and of picking up and moving on.

“Life was going on,” said Christina of his inspiration for these songs. “A couple relationships went sour, lots of time on the road. I just love those dramatic moments in life, when change is upon us and everything is uncertain.” The record is not all heartbreak and drama though. “New York City Found” takes an upbeat look at navigating the vast cityscape of NYC that feels as exciting as it is intimidating. “Yodelay” nods to overcoming childhood fears, and “I Gotta Go” is a celebration of self-realization and moving on.

Recorded at Mixolydian Studios in Lafayette, NJ over the month of July 2009, Come On In is slated for release on United for Opportunity (UFO) on May 4, 2010. The band will tour intensively throughout the spring and summer 2010 to support it.

HERE'S WHAT EVERYONE'S SAYING ABOUT YARN:

“Sometimes you know from the first note you are listening to a winner”
- Sing Out! Magazine

“Yarn has added its own signature to a genre you think you know intimately.”
- Americana UK

"I'm excited to get to sing with this band. they have a lot of heart and soul."
- Edie Brickell

“This is highly recommended music for fans of real country music with an outsider’s edge, and while that’s not always my thing, this is too good to ignore”
- Pop Headwound

“Each independent member of Yarn really brings their own flavor to the group, melding it into a treat for everyone’s ears.”
- Roots Music Report

“This debut album is full of seasoned music from a group that is truly enjoying themselves and will never have to look back. Here’s a chance to hop on board and be among the first to discover this band.”
- Village Records

“For a long time, I said that I don’t like country music, but it turns out that I just don’t like pop country.”
- No Evil Twin

“Between the comfortable vocals of Blake Christiana and the mandolin from Andrew Hendryx, just about every track on the album shines.”
- Portland Herald Press

“Yarn's debut self-titled CD reminds me of the early days of Paul Simon and Gram Parsons. Upbeat, feel good music with lyrics and musicianship that cut to the nub of American music.”
- Taproot Radio

“After hearing the first song off Yarn — the beeeeaaauuuutiful, mellow, Americana love song "Listen Up Sweetheart" — I was already sold. Blake Christiana and his bandmates didn't have to prove anything else to me. And yet, for fifty-one straight minutes, they did.”
- Dissolver Magazine

“musically, Christiana and his Brooklyn-based band Yarn have little to worry about.”
- Charleston City Paper

“a very enjoyable album from start to finish”
- Americana Roots

"The music, as with all good honk, sounds worlds sunnier than the subject matter – heartbreak and heartache, predominately – proving yet again that a little bit of sugar makes even the harshest medicine go down easier."
- Creative Loafing

"One of the best records (Empty Pockets) I've heard all the way through in the newgrass/bluegrass/alt-country style is from the Brooklyn based band Yarn."
- Chris Bonnell, Songs Illinois

"Empty Pockets is one of my favorite releases of the year thus far."
- Jonathan Keller, Marquee Magazine

"You can spin yarns or knit with yarn, either of which sounds warm and inviting. The same is true for the music of Yarn..."
- Brent Hallenbeck, Burlington Free Press

"Empty Pockets is promising to be one of the year's best follow-ups."
- Routes & Branches KRFC 88.9FM

"It's hard to believe that Christiana is only in his early 30's. His vocals have the passion and wisdom like those of a chiseled-face longtime survivor of the touring road!"
- C.W. Ross, CW's Place

"Yarn may be one of the better unknown alt-country bands out there, but if satellite radio gets ahold of Empty Pockets, they won't be unknown much longer."
- Julie Thanki, Pop Matters