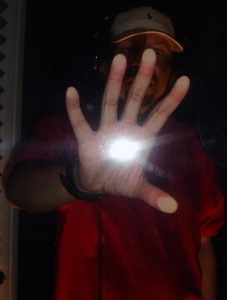 Xstyle is as thought provoking and one the most analytical emcees that you'll find in this hip hop genre. Xstyle translates what he calls "mature hip hop," a reality-based responsible brand of hip-hop, to tear down an industry which seems to simplify the very soul of hip hop music.
Xstyle is reminiscent of the golden age of hip hop mainly because he has rhymed constantly since the early eighties. But Xstyle is ultimately relevant with today's hip hop artist as well. With content that is social, mature, political, and blunt, he has you anxiously waiting on his next punch line. Xstyle's verbal delivery is on point and his content remains intact with the subject matter. Xstyle has set the bar extremely high for an underground artist who is just now treading muddy waters in the mainstream swamps. At the age of nine, he began writing and reciting poetry, often the center of attention during family gatherings. By the age of eleven he had performed in a local talent show in his hometown Portsmouth,Va. Xstyle was a pioneer in the North Carolina Hip Hop scene during the mid 90's. But currently he resides in Austin, Texas.

His humble beginnings in hip hop were heavily influenced by Kurtis Blow, Run DMC, Rakim, Big Daddy Kane and KRS-One. After nearly a decade of honing and perfecting his craft he helped to form Characta Assasinz, a group from Fayetteville, who were the first Unsigned group out of the south to be in the Unsigned Hype for the Source Magazine.( July 1996) They released a full-length Underground EP " Characta and Egos" but by 1998 the group dismantled due to indifferences. Later he formed another super crew "Nue Milli" with his partner in rhyme, (S.R.D./Druggstore) which soon suffered the same fate. Xstyle even promoted a concert in Fayetteville to stop violence, called "Unifest" in 1999. But soon he opted to pursue a career as a solo artist and producer.

In 2001, Xstyle became very sick with a rare illness called "Sarcoidosis" which before he was diagnosed, it was an inch away from it claiming his life. Thus during this trying time he came up with a name for his production company and movement "Da Illest Ya Heard Productions." Now this moniker meant something deeper than regular hip hop jargon. The average person would have giving up after going through this ordeal but Xstyle's story is one of strength and perseverance. Eventually Xstyle overcame the complication from his illness and has learned how to balance both his career and his illness.

Xstyle is now set out on a blistering campaign to garner exposure with his self-released album, "Chiks and Politiks". His lead off track "Outta my Head" gives off a vibe that makes such a strong political statement that the melody draws you into each line that he delivers. His club banger U Talking 2 a Coach" is Xstyle outtake on focusing on being a coach rather than a playa when he is in the club. Xstyle analyzes the female mind as she is always being approach by so called playas. Actually I like the whole album he had such broad selection of subject matter and his hooks were very catchy. Majority of the album's production was done by Xstyle and the rest were by Rod "KP" KirkPatrick. This album in my opinion is a must have.

With hundreds of live performances under his belt, a production collaboration with Rod "K.P." Kirkpatrick (who produced for Erik Sermon, Keith Murray, Fu Schnickens, and Redman to name a few) the production team for Da Illest Ya Heard Productions is as promising as the debut album which is bound to be an instant classic. Xstyle is in the driver seat to establish himself as the breath of fresh air we so desperately need in a smoke filled cloudy hip hop atmosphere.