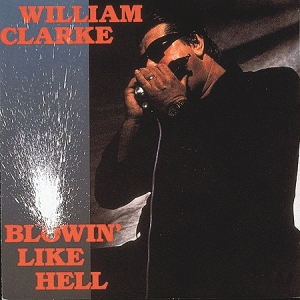 Between his huge frame and the immense sounds he coaxed out of his harmonica, West Coast blues harmonica virtuoso William Clarke was a giant of the blues. A full-time blues musician since quitting his job as a machinist in 1987, Clarke regularly toured the U.S. and Europe before his untimely death in 1996. His mix of Chicago blues traditions with West Coast swing placed him at the forefront of contemporary blues harmonica players.

Clarke's harmonica playing, particularly his chromatic work, was simply astonishing. According to the Chicago Sun Times, Clarke was "the most dynamic harp player on the circuit." The Washington Post declared, "Few can match the imposing harp and vocal power of William Clarke."

Clarke was born March 29, 1951 into a blue-collar family in Inglewood, California. While most of his friends were surfing and listening to Beach Boys records, Clarke fell in love with the blues through the early Rolling Stones albums. By age 17 he began following his dream of becoming a bluesman. He befriended blues legends like T-Bone Walker, Eddie "Cleanhead" Vinson, Big Joe Turner, Pee Wee Crayton, Lowell Fulson, Big Mama Thornton, Shakey Jake Harris, and the man who was to become his mentor, ex-Muddy Waters harmonica legend George "Harmonica" Smith. The two performed and recorded together from 1977 until Smith's death in 1983.

Between 1978 and 1988, Clarke recorded and released five self-produced albums all cut on shoestring budgets. He guested on nearly a dozen albums, as a sideman for Smokey Wilson, Shakey Jake, Long Gone Miles and other West Coast blues heavies. While fame eluded him, he built an impressive word-of-mouth reputation, receiving six Blues Music Award nominations (the Grammy of the blues community) despite the fact he hadn't yet had a nationally distributed record.

After Clarke produced his sixth album, he decided to send a tape along to Bruce Iglauer, president of Alligator Records. The explosive, soul-drenched performances caught Iglauer off guard, who said, "I couldn't believe how such a wonderful harp player and such a terrific writer, singer and arranger could have been a secret for so long. I knew we had to sign him." Clarke's Alligator debut, Blowin' Like Hell, was released in 1990.

Billboard called the album "a model of what a contemporary blues record should be...strong, soulful tunes, ballsy vocals and refined harmonica." Suddenly, Clarke and his band were in demand all over the country. They accepted over 250 bookings throughout the United States and Europe in 1991 alone, gaining new fans everywhere they played. In 1991 Clarke won a Blues Music Award for Blues Song Of The Year with his composition “Must Be Jelly” from Blowin' Like Hell.

Clarke's 1992 release, Serious Intentions, earned him the Australian Blues Award for Overseas Blues Album Of The Year. The album was filled with pulsating grooves, swinging shuffles and tasty harmonica playing. The Chicago Reader said, "Shimmering, wild chorded harp playing. He bends notes with the raucous abandon of a Chicago juker...some of the most honest, unpretentious blues being laid today."

In the last year of his life, Clarke delivered his most ambitious album, The Hard Way, and hit the road with a vengeance. He won the three top Blues Music Awards: Album of the Year, Song of the Year (for “Fishing Blues”) and Instrumentalist of the Year--Harmonica. Sadly, he didn't live to accept his awards. His death, at 45, robbed the world of a true blues giant. Alligator Records released Deluxe Edition in 1999, featuring songs from Clarke's Alligator recordings -- a fitting tribute to a true giant of the blues.