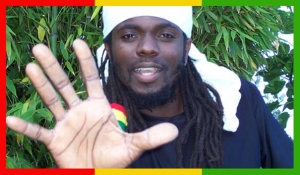 Open your ears: if you haven't heard him yet, take notice of this powerful new artist taking the genre to another level. Rooted in culture – but fiercely contemporary (with hip hop, dancehall, and R&B flavorings) - Winstrong has been on compilations with the likes of Capleton, Sizzla, and Snoop Dogg.

Touring with Warrior King & Don Carlos, who called him "the best kept secret in Reggae Music," Winstrong recently made his East Coast debut. Although native to Suriname, and having lived in Hawaii and Amsterdam, Northern California is stronghold for Winstrong, who’s performed at Sierra Nevada World Music Festival and Earthdance. Currently, he’s headed for some premier performances in Southern California.

The songs here featured come from the "Eye of the Storm" collection, mixtape CD’s are en route, as may soon be as well an official release of his recent songs under the name of the hit track “Boom Boom Blah Blah” (Sounds of the Gun).