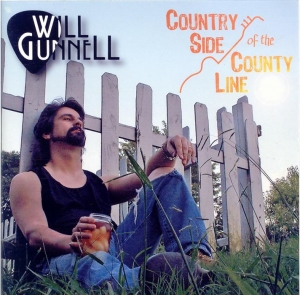 Every song has a video to it, it just hasnt been filmed yet. Thats what Will Gunnell says about the songs on his new CD Country Side of the County Line. Filled with positive, upbeat songs, the album has a variety of music for everyone including, country, rock and bluegrass. His diversity shows on the CD and comes from a wide range of influential artists such as George Strait, Brad Paisley, Motley Crue and Bill Monroe. He grew up listening to these and many other artists and is still inspired by them today.
What you hear on the Countryside album is Will in a nutshell. He writes and sings of his surroundings and everyday family life, just like most peoples lives, in songs like Little Bit of Love and If I Dont Do It (Somebody Else Will). He describes the small town he grew up in on the song Middle of Nowhere. His wit and humor show through in My First Million and Redneck Persuasion In addition, the rockin number Im Gonna Be a Star is a true account of his dreams of one day being famous.
Intrigued by music as a child his interest in music grew with the gift of his first real drum set at the age of 8. He had a natural ability to play and music seemed to come easy to him. He was constantly challenging himself with a variety of rock music including KISS to K.C. and the Sunshine Band to Led Zeppelin. All he had to do was listen to it and he could play it. By the age 13 Will was getting paid to play drums with two country bands at the senior citizen dances playing traditional country classics. Through his teenage years he performed with a number of bands playing Southern Rock, Heavy Metal and Country music. He eventually made the move to Nashville and became a member of the Nashville Songwriters Association International and had 3 songs published. Will wrote a mixture of music and over time he developed a unique style and grew to be a very versatile songwriter, singer and performer. He attended Full Sail Center for the Recording Arts in Orlando, FL to broaden his knowledge of recording and music business where he earned a specialized associate degree in recording arts. After graduation he moved back home to Danville, VA to open his own recording studio.
Will has traveled nationally and performed with a variety of different artists including Seraiah, Stir, and Latter Rain. He has recorded many artists including Forefront Recording Artist Eli. Will has also recorded and produced a variety of original music CDs where he played a majority of the instruments. Country Side of the County Line is the latest CD.
Will made it to the final auditions of Star Search and The Nashville Networks Be A Star. He came in second in Donald Trump's American Dream World Finals with over 15,000 contestants and 500 competitions worldwide. Will also appeared as an extra in the made for television film, "Is There Life Out There?" starring Reba McEntire. In addition he has appeared in concert with such acts as Atlantic Rhythm Section, Little River Band, Cravin Melon, The Guess Who.
Will is a proficient musician and performer, playing drums, guitar, bass and a great singer. He also is an accomplished composer, producer and recording engineer. This may be the first time youve heard of Will Gunnell but it wont be the last. See you on the Country Side of the County Line!