Tim O'Brien - Where The River Meets The Road 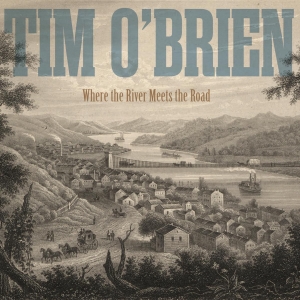 Working with the West Virginia Music Hall of Fame over the past ten years, I’m continually inspired by the musical wealth of the Mountain State. From remote mountain valleys where Scots-Irish settlers kept the old ways alive, and mining camp melting pots where black and white worked side by side, to the bustling industrial centers along it’s major rivers, West Virginia has produced an amazingly rich and varied body of music.
My musical sources here include the stellar songwriting of Hazel Dickens, Larry Groce, John Lilly, Billy Edd Wheeler, and Bill Withers. I also drew from the mountain sounds of Edden Hammons, the Lilly Brothers, and the Lonesome Pine Fiddlers, as well as from Country radio stars the Bailes Brothers and my hometown WWVA favorite Doc Williams. While this recording only scratches the surface of my home state’s musical heritage, I hope these songs tell some of my own personal story. Though I’ve traveled far and wide, I will always remain a proud son of West Virginia.


BIO:
Grammy award winning singer songwriter and multi instrumentalist Tim O’Brien grew up singing in church and in school, and started playing the guitar at age twelve. After seeing Doc Watson on TV, he became a lifelong devotee of old time and bluegrass music.

Where the River Meets the Road is his sixteenth solo release. Each of the 12 tracks on the album is connected to his home state of West Virginia. Two originals, “Guardian Angel” and the title track “Where the River Meets the Road,” tell deeply personal stories of O’Brien’s family - the death of his older sister when he was a toddler, and the tale of his great grandfather moving to his hometown of Wheeling in the 1850s. The remaining ten songs were collected and compiled after more than a decade collaborating with the West Virginia Music Hall of Fame. Inducted into the Hall of Fame himself in 2013, his work with the organization helped connect him with the sheer width and breadth of music born of West Virginia’s native sons and daughters.

As a teenager O’Brien began a self-described “walkabout,” because like most West Virginians, he felt he must leave the economically forbidding environment of his homeland. For a while he made his living playing folk gigs in Chicago and across the country, eventually landing in Colorado. There he helped found the seminal, progressive Bluegrass band Hot Rize. Their work through the 80’s and 90’s garnered great critical acclaim and eventually brought him to Nashville. His diverse musical career blossomed with the birth of solo albums, multiple chart-topping songs covered by the likes of Nickel Creek, Dixie Chicks, and Garth Brooks, and collaborations with artists such as Darrell Scott, Steve Earle, Steve Martin, and more recently Jerry Douglas’ the Earls of Leicester.

O’Brien admits that the scope of these successes would not have been possible if he had remained in his home state. This journey to find work and carve his own path not only mirrors the experience of his own great grandfather, but also the West Virginian experience as a whole. Each song, artist, and songwriter referenced on the album tells a version of this journey. Rock and Roll Hall of Famer Bill Withers’ “Grandma’s Hands” is a rare African American nostalgia piece that reminisces about growing up in the coalfields and the importance of his grandmother’s influence. “When the Mist Clears Away” written by Larry Groce, host of West Virginia Public Radio’s iconic, decades-old live show, Mountain Stage, conjures the beauty of the state’s hazy mountains and the undying, hopeful resilience of its pioneering residents. Hit country songwriter Billy Edd Wheeler’s piece “High Flying Bird” - once covered by Jefferson Airplane - describes the mortal grip of the mines and deep roots that prevent the freedom even little birds have, but we do not. As a whole, Where the River Meets the Road simultaneously tells the story of music born of the classic struggle of West Virginia and the story of what brought O’Brien to make this very record.

The pure human relatability of the album is expertly conveyed by its stellar lineup of musicians. Fellow West Virginia Music Hall of Famer, Kathy Mattea sings harmonies on two tracks and country music’s current hero of authenticity and grit, Chris Stapleton, contributes his trademark fiery vocals as well. Never failing to assemble an exceptional backing band, O’Brien calls on friends new and old for musical support, notably Noam Pikelny on banjo, Bryan Sutton on acoustic guitar, Stuart Duncan on fiddle and mandolin, and Chris Scruggs on steel and electric guitar. His sister Mollie O’Brien and his partner Jan Fabricius join on background vocals, adding familial continuity from the stories to the recordings as well. O’Brien himself opted for fiddle, guitar, and bouzouki, forsaking his primary instrument mandolin to take more of a background, foundational role in the instrumentation, allowing the story, songs, and lyrics to shine.
Written by Justin Hiltner