Wesley Dennis "Then and One More Day" 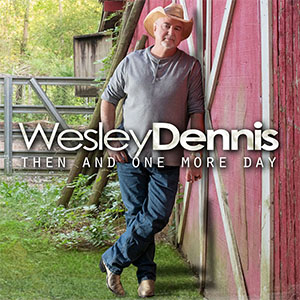 For those who truly love traditional country music, there’s no need to look farther than Wesley Dennis.
He’s been called “Country to the Core.” When Wesley Dennis takes the stage, fans know it’s the genuine article; an artist who stayed true to his roots when he first burst onto the scene with a critically acclaimed debut album in 1995, and one who remains true to those roots today.
He’s shared the stage with all of the big names, including Lorrie Morgan, Alan Jackson, George Jones, Merle Haggard, Alan Jackson, Shania Twain, Lorrie Morgan, Faith Hill, Joe Diffie, Billy Ray Cyrus, Terri Clark, Daryle Singletary, Chris LeDoux, Lee Roy Parnell, Dan Seals. He counts among his inspiration traditionalists like Charley Pride, Keith Whitley, Vern Gosdin, Mel Street and the ultimate traditional stylist, George Jones.
At just 3 years old, Dennis picked up a guitar and began to play. He wrote his first song at 7. Music was clearly in the blood of the Wetumpka, AL boy.
As he got older, he began making trips to Nashville and a twist of fate brought his music to the attention of iconic producer, Keith Stegall. Dennis soon found himself signed to the new Mercury Records, and opening shows for Alan Jackson soon followed.
A career in music can be a roller-coaster ride, and that’s just what it’s been for Wesley Dennis, but through label changes, chart-topping records, three albums, lean years or tremendous success, he’s an artist who has remained fervently devoted to the roots of real country music.
He writes from the heart, and he delivers a song with heartfelt emotions. Many of his original songs are from personal experience, but Dennis is also an avid observer. He pays attention to the details and often writes about situations he has witnessed in the lives of others.
Wesley Dennis has played for thousands and is equally comfortable playing the acoustic guitar on the porch. He’s a man who’s comfortable in his own skin, enjoys fishing and Alabama Crimson Tide football, and a Sun Drop soda on a hot day. He’s got a heart for charitable causes, and a driving passion for sharing the music he loves.
Dennis’s staying power in music is surely rooted in his determination to stay true to himself, creating and sharing what he unapologetically calls “stone cold country music.”