Webb Wilder & the Beatnecks - Born To Be Wilder 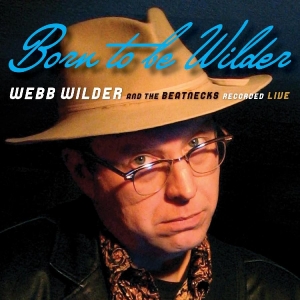 There are roots-rockers and then there's Webb Wilder. The self-proclaimed "Last Of The Full Grown Men" is large enough for the big screen, hip enough to star in cult classic B movies, and tough enough to maintain a devoted worldwide fan base through a relentless never ending tour schedule. More Like Me, his first collection of new material since 2005, is classic Webb Wilder, an exciting blend of bedrock roadhouse rockers and bittersweet ballads incorporating the roots-rock influences and irreverent attitude and wit that informs Webb's music.

As Gibson Guitar magazine put it, "For over 20 years, Wilder has mined rock 'n' roll's most hallowed ground, but unlike so many others, he has approached it all with a rare irreverence and wit. His self-effacing persona - a tongue-in-cheek 1950's noir character, equal parts high school principal, tent preacher, and private detective - gives Wilder's music a sense of fun and imagination often lacking among his peers."

A native of Hattiesburg, Mississippi, Wilder moved to Austin, Texas in 1976 with his boyhood friend Bobby "Crow" Field. While many other proponents of American roots music simply stopped at Elvis and Chuck Berry, Wilder's music incorporated a British Invasion influence that further separated it from the pack. After moving to Nashville Wilder and Field formed the Beatnecks in 1985. As Nashville moved toward unapologetically commercial fare, Wilder and Field were busy crafting their signature brand of rock 'n' roll, founded on the classic influences from both sides of the pond.

Wilder's debut, It Came From Nashville, a brazenly rocking bar-band rave-up, seems even more unlikely now than it must have seemed then. His subsequent studio albums (Hybrid Vigor, Doo Dad, Town & Country, Acres of Suede, and About Time), have continually maintained the high standard set by the first, becoming textbooks for aspiring roots rockers. Wilder has without interruption continued to play the various styles of uneasy listening that got him noticed in the first place.

In concert, Wilder spikes the punch between songs with potent doses of rustic wit and character, transcendent mediations, incantations, and codes by which to live. Webb's first Blind Pig release, Born To Be Wilder, captured that on-stage alchemy with a set featuring favorites such as "The Human Cannonball," "Tough It Out", "Miss Missy From Ol' Hong Kong", "Louisiana Hannah," and many others at their rock & roll best in front of an enthusiastic crowd of devoted followers. Elmore magazine called Born To Be Wilder "a generous helping of fresh, tasty rock 'n' roll that will leave the listener asking for seconds," while American Songwriter said it "highlights the musical attributes that make him appealing and unique."

With talent far too mischievous to be contained by any one medium, Wilder has applied his touch to the independent film world as well, producing and acting in a series of hilarious and affectionate send-ups of B-movie Americana. The movies (Horror Hayride and The Saucer's Reign) and related bonus features (Life In The Van, A Guitar Fetish) have become acclaimed underground cult classics. They were recently compiled, along with works by noted Webb Wilder cinematographer Steve Mims, on a DVD entitled Webb Wilder's Amazing B Picture Shorts. As an actor, Wilder has appeared in a major motion picture by director Peter Bogdonavich, The Thing Called Love, and in director Danny Boyd's cult favorite, Paradise Park. He's done voiceovers for countless radio commercials and even a four and a half year stint as one of America's first satellite DJs on XM radio. He's a "multi-media threat," as the Philadelphia Inquirer put it, and a guy who proves that "being off center can be very much on center."
But no one describes Webb quite as well as the man himself. He claims to be "the last of the boarding house people; a four eyed guy who doesn't smile a lot, but who doesn't frown much either; an outsider who feels as though he's on the wrong side of the tracks no matter where he's at; and a guy who knows every thrift shop and plate lunch joint in town." As for his band Webb says, "We play both kinds of music, Rock and Roll."

The new studio album, More Like Me, is a potent collection that blends roadhouse blues, lonesome ballads, and crunchy British Invasion grit into a sound that is distinctly Webb Wilder. Fans of Wilder's fretwork won't be disappointed, as Webb gives his guitar plenty of the spotlight on tracks like the rock 'n' roll rave up "She Said Yeah," the heavy hillbilly boogie of "Honky Tonkin' (In Mississippi)," and his spacey surf-flavored take on Roky Erikson's "Don't Slander Me." More Like Me also features some of Webb's most irresistible tunes yet, with tracks like "Come Around" and "Too Cool For Love" sporting infectious melodies and well chosen words that wouldn't sound out of place on one of Tom Petty's classic albums.

Webb Wilder is an evangelist for real rock 'n' roll. And as a singer, guitarist, bandleader, filmmaker, and humorist, he may be roots-rock's only true Renaissance man. More Like Me blends all the humor, wistfulness, urgency, soul, grease, heartache and humor into a sound that is just a little, well…Wilder than the rest. With its array of affecting songs and masterful performances, it will no doubt find favor with Webb's devoted legion of fans, but it's also sure to bring many newcomers into the fold.
2
What's This
Advertisement