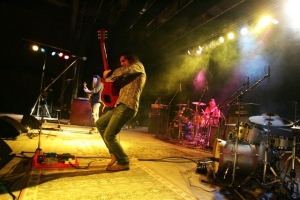 W.I.N.D. made three CDS, W.I.N.D. (2000) HYPNOTIC DREAM (double cd with video track - 2002) AND GROOVIN TRIP (2004); the last two works feauturing JOHNNY NEEL (pianist and organist of Allman Brothers and Govt Mule). JOHNNY NEEL listened to W.I.N.D. songs and invited them to his Straight-up sound Studio in Nashville to play and record together.

All the W.I.N.D. cds have been produced from ARTESUONO RECORDING STUDIO OF STEFANO AMERIO and distribuited from I.R.D. (Milan).

They took part in the biggest Italian blues festival PISTOIA BLUES FESTIVAL during the year 2003 (with ERIC SARDINAS and TEN YEARS AFTER), and during the year 2005 with Johnny Neel, in the same evening of TISHAMINGO, ROBERT CRAY and B.B. KING, where the band and Johnny had a great response from 10.000 people.

W.I.N.D. & JOHNNY NEEL have also been opening act for B.B. KING the last 2005 in Udine (Italy), a great show with great response of more than 5.000 people!
During a day off after PISTOIA BLUES FESTIVAL 2005, they recorded some tracks live in studio with Johnny Neel.

THEY ARE VERY POPULAR IN GERMANY, where their last gig with the ex Allman Bros. Johnny Neel has been described from ROCK TIMES magazine as concert of the year, and where they have been invited in the past, in occasion of important local festivals.
During the summer of 2005 they played in Germany three important gigs: the 14th of july W.I.N.D. have been HEADLINERS to one of the most important European festival: THE HIPPIE JAM FESTIVAL BURG HERZBERG, where in the same days TEN YEARS AFTER have been headliners too.
W.I.N.D. also playied in Prague and they have been invited to an important TV meeting for TV OCKO, the Czech Republics national music channel.

ONE OF THE MOST IMPORTANT MUSIC MAGAZINE IN GERMANY, ECLIPSED, choosed one of the W.I.N.D.s track (Lucky Man, from Groovin Trip) for its compilation. This complilation features some of the most interesting jam blues rock bands of the current outline, such ad Govt Mule and Porcupine Tree.

The last two CDs Hypnotic Dream and "Groovin' Trip" have been succesfully reviewed from national magazines and from french, german and American on line magazines specialized in this kind of music: Bands of Dixie, Home of Rock, Gritz, Southern Rock, Rock Times, Eclipsed; for these magazines W.I.N.D. realised interviews too.

GROOVIN TRIP has been also advertised on the famous HITTIN THE NOTE, magazine that reviews every news about the Allman Brothers Band and other musicians such as the Gov't Mule, and has been reviewed on the February 2006 issue.

For the promotion of their GROOVIN TRIP the band played with JOHNNY NEEL a nine dates tour (in Italy and Europe) during november - december 2004; this was the second time that the band played a tour with Johnny (the first one in Italy was in 2002).

GROOVIN TRIP, (actually at the FOURTH REPRINT and top of the Barchen Records - German - sells in december 2004) is a Cd half live and half live in studio, with Johnny Neel on the Hammond organ and recorded during their 2002 tour with him. It has live songs, jams in studio with Johnny and three studio tracks of W.I.N.D.. The original tracks made from W.I.N.D. show their maturity in writing music and an high level of melodic choice (as Johnny Neel too noticed).

In live performances the band loves to improvise and enlarge its songs, each member replying to the others and exchanging dynamics with bluesy phrasing, extending the sound that is typical of old-time rock, and bringing the sound to a hypnotic music frontier.