Volume Five - Down In A Cell 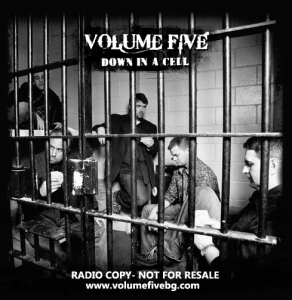 First Single From Volume Five to be Released July 13th
Mountain Fever Records will release the first single from the new recording " Down in a Cell" by Volume Five. This is their first national release and is already getting lots of pre-release attention from various radio stations in Australia and the USA.


Consisting of Glen Harrell (fiddle & vocals); Patton Wages (banjo, & vocals); Chris Williamson (bass & vocals); Jesse Daniel (mandolin & vocals); and Adam Duke (guitar & vocals), each member of Volume Five has held tenure with national touring bands prior to their collective start in early 2008. Performing with such well known acts as Marty Raybon and Full Circle, The Bradley Walker Band, The Anita Fisher Band, Randy Kohrs and The Lites, The Larry Stephenson Band, and David Davis and The Warrior River Boys, has allowed members of Volume Five the opportunity to hone his craft to perfection and gain the stage experience needed to entertain just about any crowd. Volume Five's strong vocals, dead-on harmonies, and precision picking make them one of the most exciting new "traditional" bands to hit the bluegrass scene in a long while.