Vince and the Sun Boppers - Spinnin' around 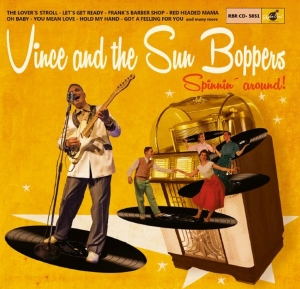 Vince and the Sun Boppers - Spinnin' around
Following their first CD release in 2016, VINCE AND THE SUN BOPPERS are ready and proud to present their second RHYTHM BOMB album, Spinnin’ Around.
Filled with brand new tracks to enjoy and dance along with, Spinnin' Around is a collection of self - penned rocking songs recorded at Berlin’s LIGHTNING RECORDERS. With jivers such as "Hold My Hand" and "Let´s Get Ready", a stroll for the ladies with "Frank's Barber Shop" or a bopper for all with ”Got A Feeling For You”, these recordings can cover any dance craving your body desires.
This is music coming straight from the heart for those who enjoy Rockabilly and Rock 'n' Roll. Let it spin around!

Vince and the Sunboppers
Hailing from one of the sunniest sites in Europe, and being inspired by the huge musical heritage of the famous Memphis label, this newly formed Italian four piece rockabilly band, although new, includes some of the oldest hands of the genre around the southern border of Europe, as Vince Mannino, singer and lead guitarist of the band has been the first one to pick straight authentic rockabilly in his sicilian homeland way back in the late seventies, when just a teenager.
The rhythm and the sound of the Sun Boppers is filled up by Silvio Chiodo on acoustic guitar, one of the most complete local musicians, Frankie Ardito, cat-man to the bones, for anyone can sense it by the way this long tall man slaps his double bass, and last but not least, on drums John Ziino a real milestone of Italian rockin’ scene, fine record collector and well known rock’n’roll DJ.
Their live shows are filled up with traditional sound and include many self-­penned songs together with a blend of covers by obscure and well-­known rockabilly heroes of the fifties. Vince and the Sun Boppers aim is having fun on stage and let their audience have a good time and enjoy their music!
8
What's This
Advertisement