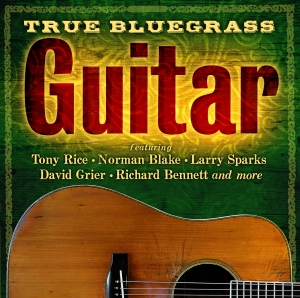 In the earliest days of bluegrass, the guitar was thought of as a rhythm instrument that augmented the vocals and other pickers. In the 1950s, several groups used the gentle strains of the lead guitar to enhance their gospel recordings. It wasn’t until the late 1950s and early ‘60s that master musicians such as Don Reno, George Shuffler, Doc Watson and Clarence White truly brought the lead guitar to the forefront of bluegrass. Their trailblazing efforts inspired several generations of pickers, the effects of which are on full display in True Bluegrass Guitar.

Assembled from the huge catalogs of the Rebel and County labels, the talent for True Bluegrass Guitar reads like a "who’s who" of bluegrass guitar picking. For starters, there’s IBMA Hall of Fame member Tony Rice who is touted as the “most influential living acoustic guitar player in bluegrass” – he is represented here with four tracks! Then there’s Tennessee native Cody Kilby, a 14-year veteran of Ricky Skaggs’s Kentucky Thunder and a former National Flat Pick Guitar Champion. Then lending an air of tradition to the project is James Alan Shelton who logged twenty years of service in Ralph Stanley’s Clinch Mountain Boys. David Grier is a three-time winner of the IBMA award for Guitar Player of the Year.

Also included here are those who are known for other talents but who also excel on the guitar. Kenny Baker was often introduced by Bill Monroe as the “greatest fiddler in bluegrass music” – yet he was also a masterful guitar player. Larry Sparks is known as one of the most soulful singers in bluegrass; his version of “Carter’s Blues” shows that he is equally adept on the six-string. Long-time Country Gentleman leader Charlie Waller was likewise a stunning vocalist who occasionally – but brilliantly – shone on the guitar.

And the list goes on and on. Nineteen tracks, an exemplary set of A-List pickers, and one low budget price. True Bluegrass Guitar.
9
What's This
Advertisement