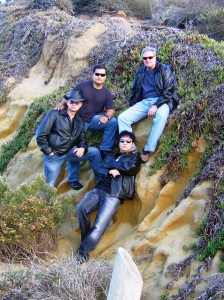 What brings this rock and roll driven band together? Not only do they love music and classic rock & roll, this band exudes what most bands seek for: Chemistry. Music is their passion in life. The band started as a group of music lovers getting together in the weekends for jam sessions. The band started by Cenon Mallari Jr. and Joel Arellaga primarily performed in weddings and church socials. During those church functions they found their 2nd lead guitarist and harmonica playing, surf music enthusiast: Lou the Axeist Grein. In 1998, together with their former band (Lahi), they were able to compose original music that soon became favorites of their local fan base. The band had various guest lead singers. In October 2001, the band held their first public performance at the UCSD campus Open House. That same year, the band welcomed a new drummer, Rob Burns. With his unstoppable beats, Rob completed the band.

In August 6, 2004, the band held a Summer Jam in the Mira Mesa area of San Diego along with other local bands. Soon after, the band renamed themselves and the name V Rox was born. V Rox then focused on writing music inspired by classic rock and roll. With combined efforts of Cenon's guitar licks, Joel's musical ears, Lou's solid melodies and Rob's backboned beats,
V Rox is poised to bring their unique sound to the top of the charts. In addition to wedding receptions and parties, they played in various night spots in San Diego County. In October 2004, the band was able to record with a local music show to share their music to the masses. Time Warner Cable and Cox cable aired the video on April 1 & 8, 2005. Presently, V Rox had just finished their 1st album and is currently signed a contract with Morrhythm Records. Also, their music is now available for downloading at iTunes, Napster Rhapsody and many more digital distributors. Stay tuned for V Rox updates and performances. ROCK ON.