Unspoken Tradition - "Back on the Crooked Road" [Single 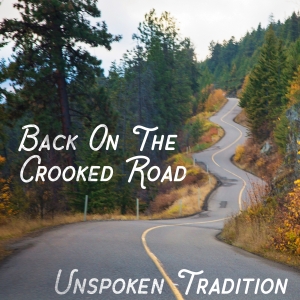 In a genre that depends on both tradition and innovation for its vitality, Unspoken Tradition has become known as a band dedicated to negotiating an original path between the two — and their latest single for Mountain Home Music Company, “Back On The Crooked Road,” is built around a story that, among other things, sheds light on the journey. Contrasting the rural routes once traveled by the music’s pioneers to the fast-lane highways taken by contemporary artists, the song’s narrator acknowledges the latter’s appeal even as he finds his way back to life on the former.

Written by a pair of IBMA Songwriter of the Year recipients, Tim Stafford and producer Jon Weisberger, “Back On The Crooked Road” offers a steady, mid-tempo groove that splits the musical difference between traditional and contemporary songwriting as it shifts keys and harmonic constructions from verse to chorus and back again.

“I knew there had been songs about Virginia's musical ‘Crooked Road,’” notes Stafford, “But we wanted to invoke something different with this one, something about being ‘out on the rural route’ after living in the city. I think it's something a lot of folks are living these days!”

For the lead vocal, Unspoken Tradition turned to its newest member, bassist Sav Sankaran, whose performance captures the song’s thoughtfulness and nuanced emotions. “Winter's chill always strikes a tone of reflection on the crooked roads we all walk to where we find ourselves in life,” he says. “Sometimes, by taking the straight and narrow path that seemed the best, we miss the journey in pursuit of the destination. The lyrics of this song perfectly encapsulate that feeling, and I tried to capture some of that wistful introspection in my vocal performance.”

“For me, the Crooked Road is the one less traveled — it’s a route of mystery and adventure, but it’s a two way road,” says the quintet’s mandolinist, Ty Gilpin. “It leads both away from and back to our sense of place. It’s a road that can take us to strange places but always leads us back to the familiar. I think we’ve all traveled the Crooked Road.”

About Unspoken Tradition
Unspoken Tradition is about new, original bluegrass. Inspired by their own influences and the roots of traditional music, they bring a sound that is both impassioned and nostalgic, hard-driving but sincere. Their 2019 release from Mountain Home Music Company, Myths We Tell Our Young, debuted at #5 on the Billboard Bluegrass charts and has seen 5 top-charting radio singles, including a #1 spot on the Bluegrass Today chart for “Dark Side of the Mountain.” Their material is mostly original and reflects the ever-changing culture of Western and Central North Carolina where they call home. The band has earned a fervent following in the Southeast, selling out shows in Asheville, NC as well as the legendary Station Inn in Nashville, TN. With heavy airplay on Sirius XM’s Bluegrass Junction and ever-growing streaming numbers, Unspoken Tradition is a fast-rising voice of a new generation of roots music artists.