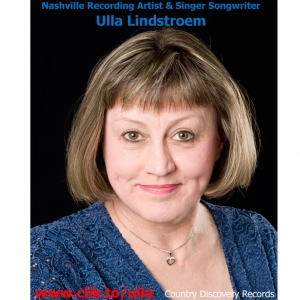 ALL of Ullas first 12 songs got heavy airplay all over the world, on a dayly basis, right from the start, and ALL of her songs was on the top of the CHARTS, (the famous ECMA Charts, among others), more than 300 times during the first two years, as "Most Played Country Songs", and all this made Ulla THE MOST PLAYED DANISH COUNTRY ARTIST on Reporting Independant Country Music Radio Stations, outside of Denmark!, - within the very 1st. year!

Because of this, Ulla decided to go back to Nashville for a 4th and a 5th time to make a follow up CD called "I GO ON DREAMING". Ullas new CD was released in late August 2008. One of her songs on it (Don’t Trust A Man), was 9 months in a row the TOP of the ECMA charts in 2007-8, when released on a compilation CD. You may look and listen at the video provided.

ALL of Ullas songs are her own original writings, and all was recorded and released on Country Discovery Records with Mike Headrick as producer, and mixed on Music Row in downtown Nashville by Mark Moseley, Sound Control Studio. The musicians are also some of the very best in Nashville, playing for all the big stars on live tours and on The Grand Ole Opry, as staff players.

Going to Nashville and recording a CD with her own songs was indeed A DREAM COME TRUE for Ulla, and her dream keeps expanding along with her success and fantastic feedback. So besides her new CD, Ulla is now dreaming of getting her songs into movies, commercials and even Broadway Musicals and shows, (you will know why, when you listen to her new songs on I GO ON DREAMING). Another dream is, to get some established big stars to sing and publish her songs.

Ulla has her own special style that seem to 'grow on people'. The more you listen to her melodious, ear catching songs and positive lyrics, the more you will love them! That is what people have been saying, from all over the world, no matter of their age or musical preference. You just can’t stay unhappy, when you listen to Ullas songs.

On Ullas website you will find much more information about her "fairytale story", her backgound, her Songs, Lyrics and the Stories / thoughts behind. You will also find a list of the 10 compilation CDs, where you will find more of her songs. AND of course you may LISTEN to more samples of all Ullas songs, some even with VIDEOES on/from YouTube and pictures from her studio and life.

PLEASE VISIT Ullas official website (clik.to/ulla) to listen and learn more about Ullas incredible dream and listen to something very special! Make sure to leave a message in Ullas Guestbook, while you are there. You may also join Ulla as a friend and fan on Facebook, YouTube & MySpace, where you can also subscribe to her news. Links are on her main site.

Ulla is VERY grateful for ALL airplay and support of her music & her dream! Please feel very free to add a link to Ullas web-sites and videos, on yours, and help spreading her positive vibes around the world, in your country and community of family and friends! Only please respect her copyrights and only post samples of her songs, like what you find on her own sites. Thank you so much for any and all support.