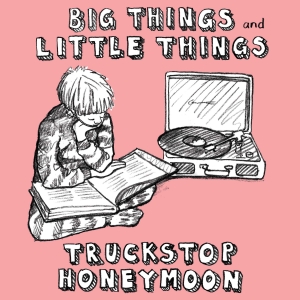 “Uncomplicated honesty permeates everything this duo does” Canberra Times, Australia

“Heart and humor — something that the couple has in spades” The Pitch, Kansas City

After eight studio albums, Truckstop Honeymoon decided not to leave their house to make “Big Things and Little Things”. Their newest album, to be released on CD and vinyl, was recorded entirely around the dining room table in their home in Kansas.
“We wanted to keep this one simple, true to who we are and what we do,” says Katie West, half of the energetic duo that have spent the past fourteen years touring internationally while raising their four children on and off the road. In fact, the only guest musicians on this recording are their kids, playing fiddle, guitar, ukulele, and washboard on select songs.
“Big Things and Little Things” mixes personal and political perspectives, love songs sung at times against a backdrop of turbulent current events. But Truckstop Honeymoon’s uplifting wit weaves through it all. Banjo, mandolin and upright bass drive the music, as Katie and Mike West trade off singing about love, life, touring and the Governor of Kansas.
The duo started their adventure in New Orleans, where they met, married and began performing together, spending their wedding night in a truck stop parking lot by the Atchafalaya swamp. After their home and recording studio were washed away by hurricane Katrina, they relocated with their young family to the Midwest music mecca of Lawrence, Kansas. There, their performing and recording careers blossomed. In 2016 the city awarded them the Phoenix Award for lifetime achievement in the Arts.
Truckstop Honeymoon continue to tour in the US and overseas, recently playing major festivals in Australia and touring in the UK. They also have recorded and produced over two hundred albums for other Americana, Old Time, and Folk artists out of their studio, the 9th Ward Pickin’ Parlor.
27
What's This
Advertisement