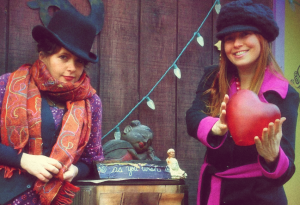 "Music that could melt a stone statue." BBC Radio Liverpool

"Here at WRUW-FM we’ve been lovin’ those Troubadours for a long time—having Aim Me and Renee on as LIVE in-studio guests and spinning their awesome catalog of CDs" -James E. Guyette WRUW, Cleveland

"Louisville mainstays Aim Me and Renee of The Troubadours of Divine Bliss have been making music together for 25 years! They’ve garnered a lot of support over that time with their positive messages of hope and love in their songs. (On) their new album called Every Heartbeat they have shared a fantastic, new, uplifting song called “Still Here”. The video and song are so great!!! Really love it."- Laura Shine, WFPK, Louisville

"Every Heartbeat made me cry...I can honestly say I have never heard such a finely crafted artistic offering. It is absolutely spectacular. You have outdone yourself." K Smitas, SHS

"...touches the depths of the human heart' -Soulstream Radio

EVERY HEARTBEAT 2020
Click here to go to Every Heartbeat

Recorded Live in 5 days in February 2020 at legendary Echo Mountain Studio in Asheville, NC, Every Heartbeat is our 8th album.

This recording has an incredible sound created by Grammy-nominated engineer Jason Richmond (The Avett Brothers, Rising Appalachia) and an authentic, warm LIVE vibe.

These songs were cultivated throughout a couple of years during a time of many transitions all around us. With the exceptional quality of production, the phenomenal compilation of songs, and the LIVE feel in the music, Every Heartbeat stands as the best recording of our career.

"A timeless original capturing the Magic and Bliss of Christmas"

Release Date: 2020
Troubadours of Divine Bliss got their start as street performers busking in the French Quarter in New Orleans 25 years ago this December.

On the corner of Royal and Toulouse, they learned how to play the guitar and accordion and honed their harmonies into a Divine sonic tonic. It was Christmastime so, the first songs they learned were Holiday tunes. They adorned themselves in battery operated Christmas lights and started offering joy (bliss) to the world with a heart to make every soul feel their worth.

It feels like a perfect celebration of that blissful beginning for them to be releasing their very first Christmas album featuring an original Holiday tune, "Christmas Dream" with that special Troubadour magic!

“We are beyond blissful to make our first Christmas album available to AirPlay Direct for global radio. This release features our first-holiday original, “Christmas Dream” as well as 5 seasonal classics that include a fan favorite, “The Grinch". – Troubadours of Divine Bliss

They have poured their hearts into capturing the feeling and dreaminess that the Holidays conjure with joy, flair, and heart-melting harmonies.

"Christmas Dream" is an instant classic and will bring back your magical memories of Christmas and help you hold those who are far, near to your heart.

A misty, fog-cloaked morning with rays of sunlight piercing through the trees, 'As You Wish' was born on such a dawn. Dreamy yet crisp, the sound of this CD is a perfect marriage of analog with digital. Woven like journal entries on your most potent days, this collection of songs go straight to the heart and the universal stories of what we long for as human beings. 'As You Wish' features accordion, guitar, mandolin, violin, cello, bass, and drums all carefully selected and tastefully delivered to enhance the soul of each song. 'Something Better' has been used nationally for The Women's Vote, Mental Health & Recovery awareness, and in Theatrical productions. 'Big to Do', 'Broken Open' & 'Extraordinary Life' have chosen as life mantras for people around the globe, and 'As You Wish' has become a Wedding favorite. How can you tell a life but through its struggles and epiphanies...'As You Wish' is the diary of a lifetime.

A fan favorite, 'Awakening to Love' was summoned as an offering to the human spirit. It's rich and sweeping sound holds both inspiring anthems and modern hymns. Showcasing the infamous ethereal harmonies of the troubadours, 'Awakening to Love' also features accordion, guitar, violin, mandolin, piano, and world instrumentation. "A masterpiece"," "this CD has changed my life...thank you", "Beautiful....a visionary treasure from the heart! "
‎"Awakening to Love" is a great album. Well recorded, beautiful lyrics, lovely harmonies. Songs that sound good enough to become absolute classics of the genre." David Norton, 'Radio Radio'

If you wrote a letter of surrender, if you waved a white flag- to what and to who would you give way? 'Sacred Letters of Surrender' is a collection of songs that sing of yielding to love, hope, change, imprisonment, and the sacred. The styles range from Americana, Bluegrass, FolkPop, Folk, Blues, and Gypsy with accordion, guitar, violin, mandolin, cello, bass, drums, tampura, and those harmonies that create a third voice. This recording, most notably, holds songs that tell stories and is unafraid to travel any road the heart can go. 'Bowling Green,KY' is based on letters sent to Aim Me by her brother while he was in jail.
'53 Years' is the story of Renee's grandparents. Each song pleads it's longing and willingness to succumb to something bigger.

"They are the embodiment of a new generation of Folk Artists who have taken the genre to the next level...with a 21st Century Creative Edge" Michigan Blissfest Organizer

This is Disc One of a Two-Disc LIVE set at The Winchester in Cleveland, Ohio. It was recorded LIVE in one show with some of our favorite musician friends on lead guitar, mandolin, violin, and banjo.

This album has great energy and showcases some of our audiences' favorite songs.

This is Disc Two of a Two-Disc LIVE set at The Winchester in Cleveland, Ohio. It was recorded LIVE in one show with some of our favorite musician friends on lead guitar, mandolin, violin, and banjo.

This album has great energy and showcases some of our audiences' favorite songs.

TROUBADOURS OF DIVINE BLISS BIOGRAPHY
Troubadours of Divine Bliss, Renee Ananda, and Aim Me Smiley have been best friends since their teens when they met at a holy-roller church outside of Louisville, KY. Despite Aim Me's dad kicking Renee's dad- the pastor- out of the church, the girls remained friends and over a decade later, fell in love. They dreamed of traveling the world making music together-singing songs about following your heart, freeing your dreams, and finding your bliss. So they moved to New Orleans armed with an accordion, a guitar, and harmonies "smooth as KY Bourbon" and became street performers calling themselves Troubadours of Divine Bliss.

Since then, they have spent two decades touring full time all over America, Canada, Scandinavia, and Europe. Their style has broken the shackles of genre and their nine recordings attest to that.

The one running thread through their music is the remarkable harmonies and uplifting message.

The troubadours are musicians, ministers, activists, writers, life coaches, retreat leaders, homesteaders, and founders of Mighty Kindness. They live in southern Indiana in the Hoosier National Forest and tour internationally year-round sharing their songs of love.