The Stanley Family - Baby Girl - A Tribute to Carter St 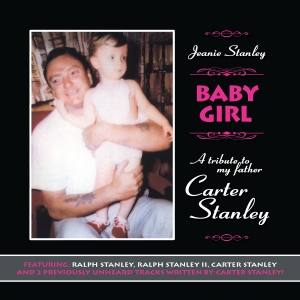 Growing up, Jeanie’s mother, Mary, told her many stories about her father and his life on the road. Mary made sure Jeanie knew who her father was. Jeanie always loved the old-time mountain music, but Mary never really wanted Jeanie to travel and be in the music business because she knew it was a hard life. Regardless, she instilled in Jeanie that Carter would not want his “Baby Girl” to forget him. Timing is everything and thankfully, Jeanie found herself at a time in her life where focusing on her father’s music and her own musical calling was right. The reason behind this heartfelt tribute album is to honor Carter Stanley and what her father’s music means to her. This is all she has to give to him – the music he loved so much. But to him, it would be the greatest gift his “Baby Girl” could give.

CMH Records is proud to introduce “Baby Girl: A Tribute to My Father, Carter Stanley.” Heartfelt and stirring renditions of Carter Stanley’s songs are sung by his daughter Jeanie, Carter’s brother Ralph Stanley, and nephew Ralph II. Jeanie hauntingly duets with Carter, through studio magic, on “Dream of a Miner’s Child,” while Ralph’s legendary voice sweetens in a cappella on “Jesus Is Precious.” The combination of the traditional bluegrass of the Stanley Brothers combined with the contemporary love of the music from their offspring proves that music like this is timeless.

2. Who Will Sing For Me
(Jeanie Stanley, Ralph Stanley, Stacy York)