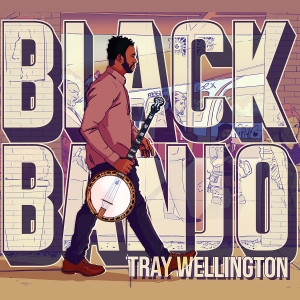 Hosting the International Bluegrass Music Association’s Momentum Awards ceremony at its annual convention, and then appearing on the organization’s Wide Open Bluegrass festival Main Stage; releasing his first singles for Mountain Home Music Company; appearing on David Holt’s State Of Music series on PBS; signing with boutique booking agency Prater Day; earning coverage in publications such as The Bluegrass Situation, and graduating from college — all recent signposts along the way in the emergence of Tray Wellington. And now, with the May 13th release of his full-length debut, the young banjo player is taking that momentum to a new level.

Boldly titled Black Banjo, the set ranges strikingly from old-time flavors through straight-ahead bluegrass and fresh newgrass to string band takes on iconic jazz. “In this album,” he says, “I wanted to re-envision people’s perspectives on who and what it means to play banjo. So many times people think playing banjo is for ‘white people,’ and I want to show people that that’s simply not at all the case, as anyone can play any form of music they want and whatever instrument they want. As well, I wanted to redefine and tackle certain genre boundaries people place on the banjo, with covers like ‘Strasbourg/St.Denis’ and ‘Naima’ showcasing the banjo’s versatility in multiple styles of music.”

Yet beyond those covers, Black Banjo shines its brightest spotlight on Wellington’s own compositions. Defying easy categorization, tunes such as the opening “Crooked Mind,” the moody “Unknown Days Waltz” and the driving “Georgia Turnaround” weave together elements of bluegrass, newgrass, old-time fiddle tunes, jazz and more to create a sound that is at once deeply rooted and refreshingly original. And in a step that offers evidence of his self-possession and artistic growth, Wellington also makes his recorded vocal debut on two of his own songs, including an inspired duet with Tim O’Brien that uses their two voices to underline the story of a man who can’t tell alcohol-induced dreams from reality.

To translate Wellington’s vision into a coherent yet multi-faceted set, producer Jon Weisberger turned to a core band of players with their own broad-ranging musical perspectives: guitarist Jon Stickley, acclaimed mandolinist Wayne Benson and bassist Kevin Kehrberg, supplemented by a trio of players — Carley Arrowood, Avery Merritt and Stickley bandmate Lyndsay Pruett — equally comfortable as both fiddlers and violinists. In their hands, each tune is explored to the fullest on its own terms, whether that means highlighting the old-time flavor of “Half Past Four,” popularized by John Hartford; delivering the relaxed swing of “Wasted Time”; powering through the stop-start rhythms and tricky timing of last year’s single, “Pond Mountain Breakaway,” or offering a compelling live-in-the-studio rendition by Wellington, Merritt and Kehrberg of John Coltrane’s lushly melodic ballad, “Naima.”

Throughout, though, it’s Wellington who’s in command, with a sense of confidence rooted in his identity as a creative Black banjo player. The journey to his full-length debut has been both challenging and exhilarating, and if there’s one thing Black Banjo makes clear, it’s that for Tray Wellington, his exploration of the world of music is just getting started.