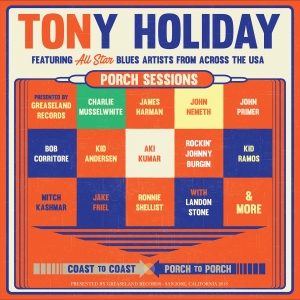 Vocalist and Harmonica player Tony Holiday, now hailing out of Memphis Tennessee, is a rising force on the Blues and Harmonica Scene both in the USA and Europe. Winner of Best Blues Band 2016 & 2017 in City Weekly Music Awards (SLC) Holiday, according to a list made by Rick Estrin, Charlie Musselwhite and others, is one of the top 10 rising harmonica players in the country.

Holiday is often referred to as a traditionalist in the approach of his harmonica playing influenced by harmonica giants like Big Walter Horton, Little Walter Jacobs, Kim Wilson, and James Cotton.

Playing 150-200 shows a year nationwide, Holiday, along his touring, has been stopping along the way to record on notable front porches putting together a project called ‘Tony Holiday’s Porch Sessions.’ Such porches have included Kid Anderson, James Harman, Kid Ramos, Charlie Musselwhite, John Nemeth, John Primer, Bob Corritore and many many more.

For Tony Holiday it’s all about expression and Blues Music has been the perfect outlet for that expression Holiday says in a recent interview for Blues Blast Magazine (2017) and Holiday plans to continue developing that expression to the fullest.