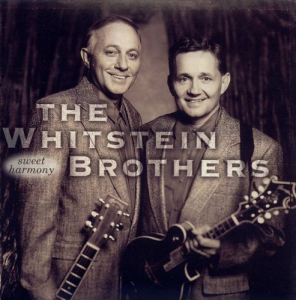 
THE WHITSTEIN BROTHERS - THE SOUNDS OF SILENCE

Rounder Records Co-Founder Ken Irwin says, “Before a Jim and Jesse concert in Cambridge, Jesse came up to me and told me he had a tape for me. After the show, my friend Hazel and I went looking for Jesse but couldn’t find him and decided to leave. We were in our car with the engine running when Jesse came running out to give us the tape without saying anything other than he hoped we’d enjoy it. I put the cassette in the car and almost immediately pulled off to the side of the road to listen. What we heard was a beautiful version of ‘Kentucky’ which sounded very much like a cross between the Louvin Brothers and Everly Brothers. We hadn’t looked at the tape beforehand so we popped it out to see what we were listening to. Was it a long lost Louvin session? The tape said it was the Whitstein Brothers.

Once we decided to work together, we started to exchange cassettes with the brothers sending me tapes of songs they were considering recording and I would send them tapes of songs I thought might work for them. They would then work up the songs they liked and send me their versions. As part of that process, I sent them ‘The Sounds of Silence.’ When the tape came back with their version, I was flabbergasted by their arrangement and called up many of my duet loving friends and played it to them over the phone.

It wasn’t until I got in touch with Charles Whitstein recently about how their arrangement came about that I learned that they had already worked on the song beforehand. Regardless, it is a creative and beautiful version and I hope you enjoy this half as much as I do.

Here is Charles Whitstein on ‘The Sounds of Silence:’

‘As teenagers in 1963, after auditioning for producers Chet Atkins and Marvin Hughes, The Whitstein Brothers were encouraged to incorporate our country duet style with some of the folk sounds of the 1960's. We soon developed a special interest in the sounds, adapting our style with some of the folk songs of that era. The song, ‘The Sounds of Silence’ became a favorite. Because of its lyrics and melody, we were challenged to attempt our own version of this awesome song, knowing we could not improve upon what Simon and Garfunkel had done.


While working on the vocal arrangement, we decided to do some slight harmony deviations from the original --- For example, at the end of each verse, the high lead would change to tenor, and we also changed the harmony on the first lines of some of the verses.

In the studio we were facinated by the way in which Jerry Douglas and the other musicians had instinctively arranged the music in such a way as to match our vocal arrangement. When it all came together, we were so thrilled, because it was exactly the way we had invisioned the song to sound--- with the country duet flavor of The Whitstein Brothers without destroying the writer's intent.’”


Bio
While no one can be expected to follow in the footsteps of the Louvin Brothers, arguably the greatest of country music's long history of brother acts (which also includes the Delmores, the Blue Sky Boys, and Charlie and Bill Monroe), the Whitstein Brothers are nonetheless keeping the tradition of harmonizing siblings very much alive -- and creating wonderful music in the process. Sweet Harmony is Robert and Charles Whitstein's fifth album for Rounder Records, and it's a beautiful, acoustically-based mix of traditional (Roy Acuff, Louvin Brothers) and contemporary (David Olney, Paul Simon) material, lovingly rendered by the brothers' sweet, steady voices.
15
What's This
Advertisement