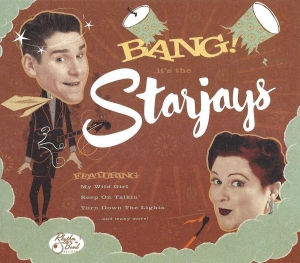 The Starjays
The Starjays, dynamic, melodic, original and catchy mid-century inspired rhythm and blues from the Northwestern USA. From the second they take the stage with sax, guitar, upright bass, piano and drums, Roy Kay and Angelatini deliver their powerful duets and harmonies on top of a jumpy rhythm that turns music venues into dancehalls.
Taking influence from Ruth Brown, Etta James, Irma Thomas, Roy Brown, Wynonie Harris & Little Richard they create their own style and unique sound. In their first two years on the scene they have already played the Viva Las Vegas Rockabilly Weekender twice, the last time on the main stage, and released their debut LP consisting of 12 original compositions "Bang!, It's the Starjays" to rave reviews.
Angela and Roy have been singing together for years, but despite their mutual love of rhythm and blues they hadn't performed together in that style. When Roy was invited to perform a set of rhythm & blues at Italy's Summer Jamboree and Angela put together an R&B set for KEXP's 20th Annual Shake the Shack Rockabilly Ball, this pair decided to join forces and form their own rockin' R&B band, The Starjays.
3
What's This
Advertisement