The Little Roy and Lizzie Show - Welcome to the Show 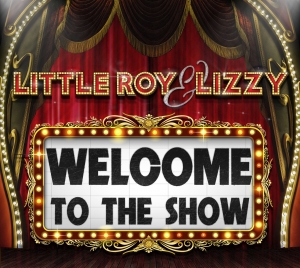 Mountain Home Music Company and The Little Roy & Lizzy Show have partnered to release Welcome To The Show, the powerhouse ensemble’s first recording in almost three years. The collection shows the veteran group at the top of their game on a deftly curated set of originals and favorites from bluegrass, country, gospel and beyond.

Aim the spotlight, cue the band
Time is fleeting but time’s at hand
There’s harmony to make before we go
It’s why we’re here
So welcome to the show.

And what a show it is—a signature mix of sacred sentiments and spirited bluegrass, with plenty of good humor, joyous gospel affirmation and nostalgia punctuated with more reflective moments that demonstrate the group has more than simple escapism on their minds. Among the latter are the thoughtful Long co-write, “Story of My Life (Preacher Man),” and the durable Carter Family classic, “Give Me The Roses While I Live”—the latter featuring Little Roy recapping the autoharp playing and harmony singing that formed such an important part of the legendary Lewis Family’s shows over the years.

Still, it’s in the upbeat songs, driven by Little Roy’s distinctive banjo style, that the Show—Little Roy, Lizzy, mandolinist Matthew Songmaker, bassist Holger Oleson and harmony vocalist Sally Sandker—finds an exuberant comfort zone. And whether it’s on country classics like Martha Carson’s “It’s All Right (If You’ve Done Your Best)” and Merle Haggard’s “Rainbow Stew,” a neglected bluegrass gospel gem like Randall Hylton’s “Let Me Go Wicked World,” the surprise REO Speedwagon cover, “Time For Me To Fly” or the energetic sing-alongs co-written by Haun, “Down Home” and “Till The Sun Goes Down,” the band supplies an abundance of sharp harmonies and show-stopping picking.

“I have been an admirer of Little Roy Lewis ever since I first met him with the Lewis Family more than 30 years ago, and became an instant fan of The Little Roy and Lizzy Show the first time I saw them knock out a bluegrass festival audience,” says Mountain Home’s Jon Weisberger. Adds Long, “I’m so honored and thrilled to be signed with Mountain Home. We can’t wait to make great music with this team!”

For the project’s first single, the group offers an inspired acoustic reworking of Tasha Cobbs’ “God’s Been Good” that features a guest appearance by acclaimed pianist Gordon Mote. “I absolutely love this song,” enthuses Lizzy. “When I was introduced to this song, it just gave me chill bumps…and even more so to sing it! Everyone did a beautiful job, and to have Gordon Mote on it….WOW…and I believe the crowds will enjoy singing it with us!”

“This is a great song that really lets me pick my style of guitar on the beginning,” adds Little Roy. “I’m also a Pig Robbins piano loving fan of Gordon Mote, who really sealed the deal with his playing on it.”

“We are so proud of this whole album,” the duo notes. “It’s the first time we legitimately got in a studio with our whole band ONLY. Then to have Gordon Mote guest playing the piano is just a treat. Two Days…and we were done. The songs really feature everybody so well, and they’re so fun, have so much feeling, and really go well with today. We hope you love it as much as we did making it!”

About The Little Roy & Lizzy Show
A member of Georgia’s legendary Lewis Family, the “First Family of Bluegrass Gospel,” Roy McArthur “Little Roy” Lewis, Jr. is famed for his powerful instrumental work and brash onstage persona. Starting as a banjoist before he reached his teens, Little Roy spent more than 50 years with the tirelessly touring group,who were inducted into the Gospel Music Hall of Fame in 2005 and the Bluegrass Hall of Fame in 2006. USA Today once called Little Roy “a banjo master, truly a picker’s picker,” but as dozens of recordings and countless stage shows attest, he is also a masterful guitarist and autoharp player, an accomplished harmony singer and an entertaining lead vocalist whose comedic impulses never overshadow his musicianship. A living—and energetic—link to the earliest days of bluegrass and bluegrass gospel music, Little Roy is beloved by colleagues and audiences alike.

Elizabeth “Lizzy” Long was born on a farm in Lincolnton, Georgia. Starting out on the piano at an early age, she soon took up the fiddle, guitar, autoharp, bass, banjo, and mandolin, all of which she has been known to take a turn on in a single Little Roy & Lizzy Show set. The first person to graduate from Glenville State College’s 4-year bluegrass music program—the nation’s first—Lizzy has played with Mac Wiseman, Jim and Jesse, The Lewis Family, Earl Scruggs and more, while releasing two well-received albums of her own—Blueberry Pie (2015), which debuted at #2 on Billboard’s bluegrass chart, and 2020’s Dreaming Again. Her song, “God Is There,” co-written with Rhonda Vincent, earned a Dove Bluegrass Song of the Year award in 2015.

For the past dozen years, these two gifted musicians and entertainers have performed together as The Little Roy & Lizzy Show, releasing 5 popular albums and winning four Bluegrass Recorded Song of the Year Dove Awards while touring extensively across North America with tight ensemble that now includes Holger Oleson (bass), Sally Sandker (guitar) and Matthew Songmaker (mandolin).
12
What's This
Advertisement