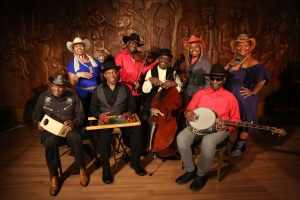 
THE EBONY HILLBILLIES
are a true phenomenon, reviving the lost art form and the American legacy of string band music for a whole new generation. This dynamic ensemble – led by Henrique Prince (fiddle, vocals) with Norris Bennett (banjo, mountain dulcimer, guitar, vocals), Gloria Thomas Gassaway (on vocals and bones), acoustic bassist William “Salty Bill” Salter (3x-Grammy winning co-writer of legendary pop hits like “Where is the Love” and “Just The Two of Us”), Allanah Salter (shaker, vocals), Newman Taylor Baker (washboard percussion) and A.R.(Ali Rahman) on “cowboy” percussion kit - are continuing to bring a fresh urgency to the genre for a 21st Century world in need of some deep musical education.

Though the Ebony Hillbillies' popularity started out on the streets of Manhattan, their vibe and influence has extended over the years to acclaimed live performances at legendary venues like The Kennedy Center, Carnegie Hall, and Lincoln Center; TV appearances and music documentaries on the BBC, Good Morning America, NBC, CBS, etc., international music workshops and festivals, visual artist collaborations at museums (including The Whitney with phenom Kara Walker and The Smithsonian Museum), Foot stomping and Hand- clapping Dance parties and more. In the digital era, they have sold thousands of hard copies of their CDs – Sabrina’s Holiday, I Thought You Knew, Barefoot & Flying, and Slappin’ A Rabbit – Live! – at their shows and via their globally popular website,
www.theEbonyHillbillies.com

Infused with the Hillbillies’ trademark mix of pop, country, bluegrass, folk and jazz, the full length collection reflects a soulful, gritty and alternately funky, romantic and socially conscious place where toes are always tapping, percussion is slapping, fiddles are jamming, front porch chairs are rocking, banjos are plucking and voices are raised in determination and triumph.

Mixing lively instrumentals and vocals over the course of 11 tracks and 3 alternately playful and hard-hitting snippets/skits, the group performs everything from a down home fiddle jam (“Hog-Eyed man”), the Artist known as Prince's "Cream," the gentle romantic cautionary tale "Fork in the Road” by William "Smokey" Robinson and an intimate cover of Bonnie Raitt’s “I Can’t Make You Love Me” to the incisive social commentaries “Another Man Done Gone (Hands Up Don’t Shoot)” (about black men and police shootings) and “I’m on My Way To Brooklyn,” penned by Gloria Thomas Gassaway's father - Harry Thomas which rolls as a lighthearted NYC inspired spiritual until the end...and three gunshots.

TRIMMIN' DA FAT 2 continues our love alive affair with sharing this great music to the masses...
“We are always looking forward - looking back." -O H Prince

Click here to go to The Ebony Hillbillies - NORRIS' CHALLENGE

NORRIS' CHALLENGE showcases a musical conversation...intimate, engaging, revealing and ever so endearing...

Norris' friend and singer/songwriter/banjoist Extraordinaire, Derroll Adams quotes, "...simplicity and truth." Norris is, "A man simply singing and playing what his heart feels, not straining his gizzard to be commercial or sound like somebody else, just himself."
Enuf said.

Click here to go to The Ebony Hillbillies - Slappin' A Rabbit - LiVE!

Imagine a world before electric light. Imagine an America where the railway is new and radio is still a dream, yet the nights are full of music and dancing.
The music in the air, the soulful, heart-scratching sound of fiddle and washboard, emanates from the misty bayous and the shadowy Appalachian hollers; under the star-lit night, in a world lit only by kerosene, the seductive, sinewy songs rise from slave sheds, fishing shacks, big-city rooming houses, and everywhere in between. The music is born of deprivation, disenfranchisement, and disappointment, but it is still leaping with joy even if is just as often weeping with melancholy.
African American string band music is a tradition that pre-dates jazz, pre-dates audio recording, and was written about even before the Declaration of Independence was signed. African American strings bands were an essential part of daily life throughout the 18th and 19th century; they played for pleasure, played for church, played for dances, and played to relieve the enormous stresses of life on the plantation.
String Band, music also served as an early breeding ground – perhaps the first in American history – for musical and creative integration. African Americans (both freemen and slaves) were introduced to the fiddle and other string instruments by Scottish and Irish immigrants to Appalachia and the rural south. It’s the sound of America, it’s an ultrasound of the birth of the pop century, it’s even a glimpse at the flesh and bones behind everything you hear on the radio today and everything you’ve ever danced to.
One of the reasons sting band music is so important is that it laid the groundwork for jazz, mountain music, country music, and even the rhythms and melodies of contemporary pop. The DNA of the entire American musical experience can be found in string band genre.

The Ebony Hillbillies’ latest album is Slappin’ A Rabbit, a live reckoning of their infectious, dexterous, ancient modernism. Its remarkably fresh and accomplished music that tells an important story about America. By Tim Sommer

Click here to go to The Ebony Hillbillies - Barefoot And Flying

“Not all black artists are willing to walk away from their history…..With this latest cd, they seek to revive interest into the true origins of American country music and bluegrass. Their music deals with realities about slavery and antebellum life which contributed to the demise of Black String Band Music as a popular medium. Primarily a “good time folk dance band,” the Ebony Hillbillies also provide some unexpected and viable insights into the profound contribution of black artists to so many aspects of American Music." - Richard Alderson

Click here to go to The Ebony Hillbillies - I LOVE EH SESSIONS - VOL.2

Click here to go to The Ebony Hillbillies - I LOVE EH SESSIONS - VOL.1

The Ebony Hillbillies are not only one of the last black string bands in AMERICA, but they are the only string band based in NYC. Consisting of fiddle, banjo, washboard, and bass fiddle, they have successfully created a following that has crossed over to audiences in pop, country, bluegrass, folk, jazz, and beyond while maintaining their grassroots credibility. Their 19thcentury string band sound was popular in the 1920's and 1930's. This was a key element in the genesis of jazz and virtually everything after (blues, bluegrass, rockabilly, rock & roll, etc...). With a nothing's off-limits repertoire that pays homage to tradition but keeps an eye and ear on the present and future, The Ebony Hillbillies play a mix of tasty originals, unique renditions of classics we know and love ("Waltz Across Texas," "Liza Jane," Tim O'Brien's "Time To Learn," "Cluck Ol' Hen," "Jericho") and wonderfully unexpected contemporary pop/soul songs like Marvin Gaye's "Sexual Healing."

The Ebony Hillbillies' sophomore CD, I Thought You Knew continues to provide a great introduction to a largely forgotten cultural legacy.

Click here to go to The Ebony Hillbillies - Sabrina's Holiday

The Ebony Hillbillies are not only one of the last black string bands in AMERICA, but they are the only string band based in NYC. Consisting of fiddle, banjo, washboard and bass fiddle, they have successfully created a following that has crossed over to audiences in pop, country, bluegrass, folk, jazz and beyond while maintaining their grassroots credibility. Their 19thcentury string band sound was popular in the 1920's and 1930's. This was a key element in the genesis of jazz and virtually everything after (blues, bluegrass, rockabilly, rock & roll, etc...). Those myriad influences can be heard to good effect on the group's debut CD, Sabrina's Holiday. The disc explodes with fascinating takes on such standards as "Liza Jane," "Granny Will Your Dog Bite" and a particularly edgy interpretation of "Cluck Old Hen" along with a couple of originals and the old folk song, "Shenandoah," which Norris sings with power and passion.

Sabrina's Holiday is also a showcase for Norris' hard-charging dulcimer playing. "The dulcimer fits together with the violin in a different way than the banjo and the fiddle," Rique explains. Rhythmically, it's a completely different sound. [When Norris switches from the banjo over to the dulcimer], it's like 'here we go—now we're a different group!'"