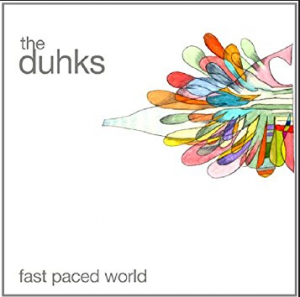 "Fast Paced World by The Duhks was written in 2007 by Sarah Dugas, who had just joined the band with her brother,Christian. The Dugas siblings joined the band after the departure of original vocalist, Jessee Havey, and percussionist, Scott Senior, and brought with them ntimate relationships with Rock'n;roll, Afrobeat, and funk, adding to the bands cornucopia of acoustic traditions.

The song criticizes our societies obsession with personal possession, and the use of religion as a propaganda tool by the elite. Not surprisingly, it was criticized in The Washington Post, as a Monotonous Neo-Liberal Rant. This didn't prevent the band from playing it, nor fans from enjoying it, and dancing their butts off." ~ Leonard Podolak


Bio:
The Duhks (yes, as in "quack") are GRAMMY winners, Juno Award winners, and Americana Music Association winners. They weave together a wholly unique tapestry of music that pulls from influences ranging from rock to folk to world music. Vocalist Sarah Dugas can sing in 14 languages and the band has the musical chops to inspire John Paul Jones to join them on-stage for a Led Zeppelin cover.

Hailed by The New York Times as one of the artists at the forefront of the neo-folk movement, the Duhks continue the evolution with their fourth album Fast Paced World (Sugar Hill Records). Their new single "You Don't See It" (impacting radio now) showcases the band's ability to bring a great song to life while their up-tempo title track "Fast Paced World" speaks to the ethos of a generation at the crossroads of making decisions about the world around them.

The Winnipeg, Manitoba-based Duhks have always gravitated towards traditional roots-based song structures, but they've never stopped evolving since their inception five years ago. Due in part to a collective musical worldview that knows no boundaries, that evolution led the band to their latest offering Fast Paced World, the first Duhks record to feature prodigies Sarah and Christian Dugas (replacing vocalist Jessee Havey and percussionist Scott Senior respectively). It's an album that reflects the quintet's newfound confidence, with Sarah bringing five original songs to the band's encyclopedic collection of originals and covers both old and new.

The French-Canadian born Dugas siblings have been immersed in music their whole lives, thanks in part to their musician parents. "We had a family band that toured across Canada when I was 7 and Christian was 9," remembers Sarah. "My father had a recording studio in the house, so I grew up hearing a variety of musicians playing everything from rap to rock to world beat. I grew up in a fun and creative environment."

Dugas' emergence as a songwriter has clearly contributed to the group's progression — the other members are fiddler Tania Elizabeth, guitarist Jordan McConnell and founder/banjo player Leonard Podolak — from the jaunty pop of "You Don't See it" to the jazz-waltz of "This Fall," the Duhks' enthusiastic fan base has embraced the changes. "The reaction has been really positive," says Dugas. "We've been able to keep the old fans and gotten some new ones as well."

“There's a more liberal attitude in the band when it comes to songwriting approaches,” admits Podolak. That attitude has even extended to drummer Christian's use of a full kit, in contrast to the band's previous use of just percussion. "My musical tastes have broadened immensely since we first started,” Podolak adds. “I think we've evolved musically, while maintaining our roots, but everybody in the band listens to so many different things, it was bound to happen.”

It's that kind of musical DNA that makes the band's spot-on fusion of traditional bluegrass, folk rock, Afro-Cuban jazz and soul so accessible and yet so hard to pigeonhole. It's also earned them a Grammy Award nomination in the Best Country Vocal Performance category as well as a Juno award in their native Canada.

Accolades aside, the band doesn't see any reason to pull their punches lyrically, as Dugas laments on the funky title track, "We've forgotten what's sacred in this fast-paced world." "It's a song that's essentially about over-consumption," remarks Podolak. "We've all grown up with an outlook where's there's enough for everyone without destroying the earth."

Environmental issues are a passion for the band, inspiring them to launch The Duhks Sustainability Project (www.greenduhks.com) in October 2007. Spearheaded by Tania Elizabeth, the band's goal is to "tour on as sustainable a basis as possible; fueling our vehicle with Biodiesel, supporting local organic farmers wherever we go, wearing sustainable eco-conscious clothing, using earth-friendly shampoos, soaps and cosmetics and offsetting remaining CO2 emissions with carbon credits."

"As a band, it's something we feel very strongly about," says Podolak. "We just want to reduce our carbon footprint as much as humanly possible."

Fast Paced World was produced by the Nashville-based Jay Joyce (Patty Griffin, John Hiatt), who joins an impressive set of producers (Béla Fleck, Tim O'Brien) before him. "Jay's basement studio was like something out of the Star Trek Enterprise," laughs Podolak. Despite trying to quit smoking at the time (4 nicotine patches at once!), Joyce was "very open to our ideas and very easy to work with. I also think he learned as much from us as we did from him about combining the acoustic and electric elements of our songs in a studio setting," continues Podolak.

As the band continues their own musical evolution, Fast-Paced World illustrates just how far the Duhks have come—and just how far they're willing to go to challenge themselves artistically. Ultimately though, according to Leonard, the Duhks "just want to play music that speaks to everybody." Mission accomplished.
47
What's This
Advertisement