The Crowe Brothers - The 615 Hideaway Records 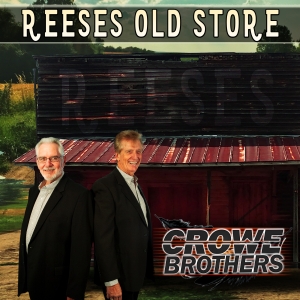 The first A sided single is written by Randy Yates titled “Winter Wren’s Song”. This secular song is a sad and tragic love song performed in a slow waltz style with the highly recognizable signature sound harmonies of the Crowe Brothers to capture the full bluegrass mountain traditional sound. The story is told of a love lost that cheated on him by a smooth-talking gambler in the big city and he can hear the winter wren’s song outside his window as sad and blue.

The uplifting gospel “I Won’t Be A Willow” is the second A sided single written by Steve Watts and Bill Castle. “I Won’t Be A Willow” showcases the Crowe Brothers fine talent we love for combining their beautiful blended harmonies with a powerful inspirational message that will bring a smile to your face. This is Traditional Bluegrass gospel at its best…and the message of faith is clear as heard in the song…I’ll be as a tall oak, not a willow in the wind.

Both new singles as well as the album is available for download to D.J.’s and program directors on AirPlay Direct.

For more information about The Crowe Brothers go to www.crowebrothers.com

ABOUT THE CROWE BROTHERS:
With Josh Crowe on guitar, and Wayne Crowe on bass, the Crowe Brothers’ music career has spanned more than four decades and a dozen recording projects.  Growing up in Clayton, Georgia, Josh and Wayne began playing music as boys with their dad, Junior Crowe, and with various local bands playing bluegrass and gospel.  In 1975, they teamed up with Raymond Fairchild and worked the bluegrass festival circuit and traveling the country with him full-time for the next 15 years, and relocated to Maggie Valley, NC.  Over the years of their career, the Crowe Brothers have made notable appearances on the Grand Ole Opry and at the Library of Congress, as well as numerous National TV show performances, including the Bluegrass Spectacular, Fire on the Mountain, Nashville Now, I-40 Pickin’ at the Paradise, and American Music Shop.

To their credit, they have received recognition from the SPBGMA association (Society for the Preservation of Bluegrass Music of America) with awards for Best Bluegrass Rhythm Guitar and Best Instrumental Band, and were nominated by IBMA (International Bluegrass Music Association) for Emerging Artist of the Year.  In 2009, their recording of “Cindy Mae” (written by Cody Shuler), went number one on several bluegrass charts. In 2011, “He Could Pick the Hound” (penned by Steve Watts), also reached the number one slot.

Wayne left the road for a while around 1990 and Josh continued to play music with other acts such as Crowe & McLaughlin (David McLaughlin, formerly of the Johnson Mountain Boys) and with his own band, The Josh Crowe Band, resulting in a recording project for both acts.  While not on the road, Wayne and Josh have worked at numerous theaters around Maggie Valley, NC and Gatlinburg for the past 45+ years, including the Stompin’ Ground and the Maggie Valley Opry.

In 2005, Josh and Wayne began touring once again as the Crowe Brothers, reuniting their brother harmonies.  Josh is also an accomplished songwriter and has written many of the songs that they perform, including “The Winds Are Blowing in Maggie Valley,” “I Knew It Wasn’t You (Telephone Song), “Broken Heart Bound,” “Take Me By The Hand,” “Million for a Broken Heart,” and “Grandma’s Little Boardside Cabin.”
16
What's This
Advertisement