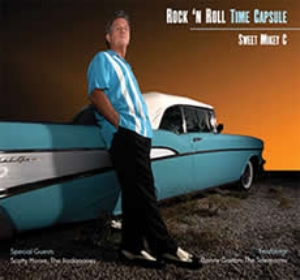 About Sweet Mikey C
I will tell you that Sweet Mikey C is not my real name. As if you couldn't figure that out by yourself. Because Tom Petty's guitar player, Mike Campbell, and I have the same name, I decided to use Sweet Mikey C.

My family moved from Phoenix to Odessa, Texas in November, 1956, the middle of my third grade year. We pulled into Furr's Supermarket, which had a small room for kids that featured a TV. The Teen Kings were on. Their singer was a young cat named Roy Orbison. If my memory serves me correctly, the show was called the Hub Jamboree, sponsored by Pioneer Furniture, and it was Saturday. If it does not serve me correctly, I'm sure someone from West Texas will let me know. But, heck, boys, I was only in the third grade.
Before leaving Phoenix, I was already hooked on Elvis. And that's Scotty Moore's fault. The sound of his guitar and how he played it were very addicting to a youngster. Then came Buddy Holly. Another early influence was Dean Martin. In those days I wanted to look like Elvis, sound like Roy Orbison, and be as cool as Dean Martin. Still do. Oh, well.

Years later I wanted to make a record with those early sounds, mixed in with some oldies and some original tunes. And then drummer Shannon Ford introduced me to Danny Gatton. I had never heard of Danny, but while listening to a live recording of their band, I knew he was the one I wanted to play on this record.