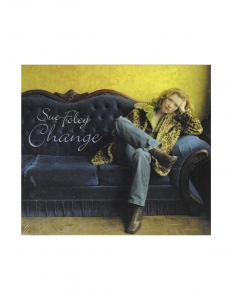 Sue Foley is one of the one of the finest blues and roots artists working today. Foley spent her early childhood in Canada, mesmerized by her father’s guitar and started her professional career at sixteen. By twenty-one, Foley was living in Austin, TX and recording for Antone’s — the esteemed blues label and historic nightclub that helped launch the career of Stevie Ray Vaughan. Her first release, Young Girl Blues, quickly rooted her unique talents as a proficient blues guitarist, inspired songwriter and captivating vocalist. Foley has toured steadily with her band, toting her signature pink paisley Fender Telecaster—working and sharing the stage with greats such as BB King, Buddy Guy, Lucinda Williams and Tom Petty. In 2001, She won the prestigious Juno Award (Canadian equivalent of the Grammy) for her CD, Love Coming Down. Foley also holds the record for the most Maple Blues Awards (seventeen) and has earned three Trophees de Blues de France.

“Foley has a killer voice, an impossibly alluring blend of sex and innocence to go with those blazing guitar chops.”- Philadelphia Enquirer


“Unplugged, but electrifying nonetheless, Canada-based blues woman Sue Foley's first live disc was recorded in one take with a band that hadn't rehearsed the set. Yet, instead of a sloppy, slapdash show, she delivers her most inspired and undoubtedly most intimate album to date. With a sparse three-piece band nimbly following along, Foley digs into personal blues favorites, dusty obscurities, new songs, and even a George Harrison cover. Delta blues, Piedmont-style fingerpicking, boogie-woogie, folk, and even jazz mesh in a set that easily shifts from shyly sensitive to sadly ruminative to unabashedly sexy. Foley's quivering, almost childlike voice perfectly juxtaposes these emotions as she sings with loose-limbed confidence, helping to create an uninhibited feel that jumps out of the grooves.” -Blues Revue

“She is in fine form…right on the money.”- Exclaim
11
What's This
Advertisement