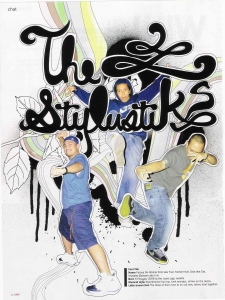 The new evolution in sound, The STYLUSTIKS is an innovative combination of three world class scratch DJ's to create original music. Revolutionary DJ's and veteran Malaysian and Indonesia turntablists Fuzz, Cza, and Uno transform their turntables into non-traditional instruments utilizing select records to produce a musical soundscape of melodies, percussion and tone that is unbelievable. Each DJ also belong to the top three Malaysian Hip Hop groups in Malaysia; Ahli Fiqir, Pop Shuvit and Teh Tarik Crew. Individually, DJ's Fuzz, Cza and Uno have competed and won several awards in nationwide DJ championships. In addition, they have also represented Malaysia in International DJ competitions. This new band represents an evolution in live music and can be seen performing at Malaysia's top music awards shows. A STYLUSTIKS show is more than a performance, it's an all out party! Playing music that ranges from expansive experimental jazz, hip hop to explosive funk romps for the dance floor. The STYLUSTIKS are bringing new textures and styles in sound, breaking new ground in today's music scene and setting new standards for the future of music and turntablism.
0
What's This
Advertisement