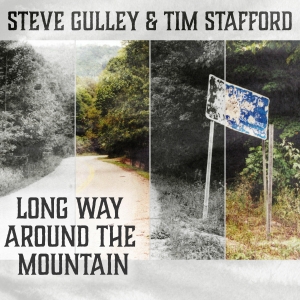 From modern tales of love and loss to stories of hard-working mountaineers, the award-winning team of Steve Gulley and Tim Stafford wove compelling narratives out of historical events and personal, emotional journeys alike — and never so well as when the two coincide, as they do in “Long Way Around The Mountain,” the new Mountain Home Music Company single from the duo. Built around a true story, the song offers a vivid portrayal of life underground and the violence that periodically flared up in the coal fields as miners sought to organize.

That alone would have given the release some gravity — it’s a theme the two have treated more than once, both together and individually — but with the sudden passing of Steve Gulley in August at the age of 57, his musical legacy takes on an even deeper emotional weight. So it was natural that, when planning a second release from the duo’s already-recorded material, thoughts would turn to a song based on events handed down from one generation of the singer’s family to the next.

“‘Long Way Around the Mountain’ was special to Steve because of his family's connection to the events in the song,” recalls Stafford. “Steve had a keen sense of family history, and as a History major at Lincoln Memorial University, he was well aware of the role of coal mining and labor unrest in Appalachia — and specifically his region. We had written about it before, with songs like ‘A Town That Isn't There,’ (recorded by Mountain Heart) which dealt with the company towns that many of his ancestors lived in.”

On “Long Way Around The Mountain,” muscular bluegrass picking from Ron Stewart (banjo, fiddle), Thomas Cassell (mandolin), bassist Barry Bales and Stafford on guitar give life to Gulley’s heartfelt recounting of the story of his native eastern Kentucky’s “Fork Ridge Coal Mine War” at one of the area’s few non-union operations long ago — told in the voice of miner Marcellus Gulley, his great-uncle.

“Steve's dad, Don, said that Steve had spoken quite a bit with Don's mother — Steve's grandmother — about what happened in this case,” Stafford continues. “And I remember Steve's vivid recollections about the miners being told to find another way home from the mine since there was ‘blood running down the highway’ and ‘they were shooting men down at the gate.’ We put Steve's words directly into the song as we told the story of hard-working men just trying to make a living, who learned through the grapevine that they had better take the long way around the mountain to make it home alive.”