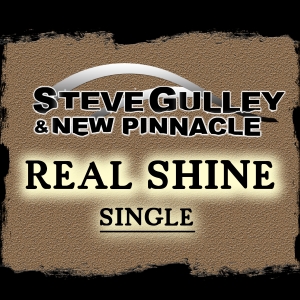 Produced by Steve Gulley, HIGH PEAKS AND NEW GROUND is the group’s fourth album on Rural Rhythm Records and features the up-tempo, hard drivin’ #1 single “Real Shine”. Gulley co-wrote six of the songs including the first single "Real Shine”, which was co-written with his chief writing partner, Tim Stafford of Blue Highway.

HIGH PEAKS AND NEW GROUND contains 12 songs; six hit Bluegrass songs representing the HIGH PEAKS and six new songs, including the current hit, “Real Shine” representing the NEW GROUNDelements on the album. New Songs on the album include the new single “Leaning Toward Leaving”, “Moonshine Or The Coal Mine” written by Thomm Jutz and Jon Weisberger; “Just Because You Can” written by Daniel Salyer and Jeff McClellan; the gospel song “The Raging Storm” featuring lead vocals by band mate Bryan Turner and Gulley revisits his traditional country roots with his version of the Webb Pierce classic, "Even Tho".

"Our new album is a unique collection of music in the fact that it allows us, as a band, to look back at some of the most successful songs we've been able to create and record in the past few years while, at the same time, looking forward and establishing a strong beginning to the future of New Pinnacle with the fresh, new music we've included here…Six of our most recognizable songs, six brand new tunes, ALL pure New Pinnacle." – Steve Gulley

4. Moonshine Or The Coal Mine
(Thomm Jutz, Jon Weisberger)

8. Just Because You Can
(Daniel Salyer, Jeff McClellan)

Written by Steve Gulley and Tim Stafford, “Leaning Toward Leaving” is the second single from the groups’ new album HIGH PEAKS AND NEW GROUND.

“Leaning Toward Leaving” has that signature hard drivin’ sound that reminds us of other big Steve Gulley And New Pinnacle hits like "Real Shine", “Leaving CrazyTown”, “Aim High”, “Drowned In Sorrow” and more.

“‘Leaning Toward Leaving' is a song I wrote with my good friend, Tim Stafford. It tells the story of a guy who keeps threatening to leave a relationship but just can't seem to follow through on his promise to go. His heart keeps overruling his mind in a constant emotional tug of war. It's a fun, up - tempo tune that helps to put a light - hearted spin on how crazy love can be."- Steve Gulley

HIGH PEAKS AND NEW GROUND is produced by Steve Gulley.

The Gulley family name enjoys a rich musical heritage that reaches across generations with strong roots in Bluegrass and Mountain Gospel music. It starts with long time radio personality Don Gulley who was a founding member of the Bluegrass group the Pinnacle Mountain Boys. Don’s son, Steve Gulley, has carried on the family tradition performing for many years with Doyle Lawson & Quicksilver, as a founding member of Bluegrass super groups Mountain Heart and Grasstowne, as a regular featured performer at Renfro Valley and with Steve’s longtime friend and colleague Dale Ann Bradley.

Steve Gulley & New Pinnacle includes; Steve Gulley (guitar, vocals), Bryan Turner (bass, vocals),Gary Robinson, Jr. (mandolin) and Matthew Cruby (banjo, vocals). Steve Gulley certainly does not need any introduction to the Bluegrass community with accomplishments that include 16 years as a featured performer, staff musician, music director, studio manager and producer at Renfro Valley, KY. From 1994-96 Steve was a member of Doyle Lawson & Quicksilver and a founding member of Mountain Heart ('98 - '06), Grasstowne ('06 - '11) and with longtime friend Dale Ann Bradley through 2014. Steve is a winner of 4 IBMA Awards including Co-writer of the 2008 Song Of The Year, "Through The Window Of A Train", by Blue Highway and SPBGMA Multi award winner including 2008 Album Of The Year, "The Road Headin' Home”, by Grasstowne.

Rural Rhythm Records and Steve Gulley have enjoyed a long and successful friendship and business relationship for many years yielding three Steve Gulley solo albums and eight Steve Gulley artist produced albums since 2010 beginning with the release of “Dogwood Winter” by Steve Gulley and Tim Stafford.