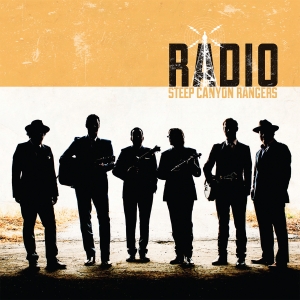 “…holding fast to bluegrass roots but refusing to do what some hard-liners maintain passes for tradition: aping the sounds and styles of first-generation bluegrassers Bill Monroe
and Flatt & Scruggs.” – The Tennessean

Grammy Award-winning Steep Canyon Rangers’ highly anticipated new album, RADIO, will be released August 28 on Rounder Records and can now be pre-ordered via Amazon. Produced by Jerry Douglas (John Oates, Alison Krauss, Béla Fleck), the album’s title track premieres today on The Wall Street Journal’s Speakeasy blog. Of the track, The Wall Street Journal comments, "Led by bright fiddle and tight, interlocking harmony vocals, the track is a wide-eyed tribute to the magic of discovering music over the airwaves, with sly references to other songs salted into the lyrics." Stream the song and read the piece here: http://on.wsj.com/1GLaTft. In addition, the band is currently in the midst of a widespread U.S. tour including dates in Telluride, CO, Boulder, CO, Charleston, SC, Raleigh, NC, New York City and Washington, DC. See below for complete details.

RADIO is Steep Canyon Rangers’ ninth studio album and was recorded with Douglas at Asheville, NC’s Echo Mountain Recording Studio. The album comprises twelve all-original bluegrass/ Americana tracks written by Sharp, Humphrey, Platt and Guggino in varying degrees, including a few co-writes with fellow musicians from the folk world such as Phil Barker of the Carolina bluegrass band Town Mountain.

RADIO follows Steep Canyon Rangers’ 2013 release, Tell The Ones I Love, which Bluegrass Today praised as “…a great mixture of today’s bluegrass styles, excellent harmonies, and a few surprises…an excellent album…The Steep Canyon Rangers have delivered another winner, and their fans are sure to be pleased.” Ed Helms’ The Bluegrass Situation asserted, “It’s an exquisite recording, a wonderful marriage of their talent and work ethic, and Larry Campbell’s remarkable intuition.” Previously, their 2012 release, Nobody Knows You, was presented the Grammy Award for “Best Bluegrass Album.” The band has also been nominated for and won multiple awards from the International Bluegrass Music Association, including Entertainers of the Year in 2011 for their work with Steve Martin.

Continuously involved with the community and charitable organizations, Steep Canyon Rangers’ annual Mountain Song Festival, which benefits the Boys and Girls Club of Transylvania County, will celebrate its 10th Anniversary this year, kicking off with an inaugural Steep Canyon 50 K & Relay Ultra Run on September 10th. Additionally, the band has entered a partnership with Oskar Blues Brewery and their CAN’d Aid Foundation as well as SevenBar Aviation and their affiliated hospital foundations.
29
What's This
Advertisement