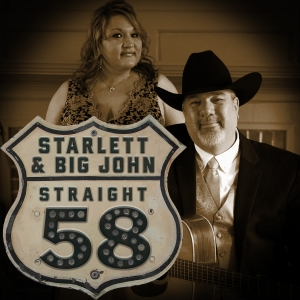 It’s been just three years since guitarist Big John Talley and singer Starlett Boswell happened to meet, but in that relatively short time, they have garnered praise from all corners of the bluegrass community.

Now, with a new single, a prelude to their upcoming debut album on Rebel Records, Living In The South, due out early next year, there is little doubt that the kudos will continue. The heartfelt strains and idyllic imagery shared in “Straight 58” promises to fulfill all the expectation that’s been given them so far.

“Starlett and I have agreed for awhile that we needed to write a song about Highway 58, which is the main road that parallels the Virginia/ North Carolina line and stretches the full length of the state,” Big John reflects. “Coincidentally, both of us live right off of the Highway but three hours apart from each other. So, one night when she had left my house after a rehearsal to head home she called back to tell me it was raining. I said be careful since Highway 58 is so straight and she replied, ‘Yes Straight 58 back to the mountains.’ She immediately began humming a melody and told me to grab a pen and we then began writing the song. We started going back and forth with the wording and trying to put a heartbreak twist on it, along the lines of other memorable road songs we were familiar with, like ‘Highway 40 Blues’ or ‘Lost Highway.’ And that’s how ‘Straight 58’ was born.”

The new music, recorded at Starlett & Big John’s Studio in Southampton, Virginia, features Starlett on bass and vocals, Big John on guitar and vocals, along with the solid support of David Carroll playing banjo, Johnathan Dillon on mandolin, and Ron Stewart, who also produced and engineered the project, guesting on fiddle.

So too, it’s the kind of sound that has earned the pair kudos from critics, radio programmers, and promoters alike.

Of course, those kinds of accolades are rarely given gratuitously. The duo’s first album, Till The End Of The Road, helped solidify their standing, reaping widespread praise for both its impressive array of original material and its well-chosen covers. Indeed, it seems certain that Starlett and Big John are well on their way to establishing a profound presence in today’s fertile bluegrass environs.
30
What's This
Advertisement